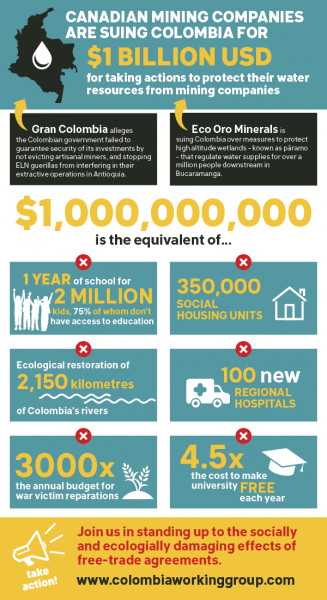 Two Canadian mining companies are invoking the Canada-Colombia Free Trade Agreement, signed in 2008, as a means of extracting US $1 billion from the government of Colombia. The government’s crime: having had the temerity to protect its water resources while not doing enough to repress demonstrators.

This situation highlights two important facts: first, that the people in Colombia who are affected by Canadian mining have no access to justice, and second, that the mining companies have no trouble using certain legal provisions, particularly in the field of commercial law, to blackmail governments into keeping out of the way of their revenue streams.

One of these companies, Gran Colombia Gold, is threatening to sue the Colombian government under the CCFTA arbitration mechanisms for $700 million.1 Gran Colombia accuses Colombia of failing to guarantee the security of its investments. The company arrived in the historic small-scale mining village of Marmato in 2009. Its initial proposal was to demolish the village and turn it into an open-pit mine; an intense socio-environmental conflict ensued, during which the village priest, José Reinel Restrepo, was assassinated in 2011 for speaking out against the project.2 Since 2013, the town’s miners have been holding strikes and blockades to prevent the company from shutting down their claims.3 In February 2017, Judge Vargas of the Constitutional Court ordered the company to consult the residents on its mining project.4

In 2010, Gran Colombia arrived in the municipalities of Segovia and Remedios (Antioquia department), where it had acquired the concessions of Frontino Gold Mine. However, that mine had, in 1977, been ceded to its employees in payment of debts.5 Since the acquisition, the area has been embroiled in legal and social conflict, yet the company was fully aware of the situation when it arrived. The most recent strike persisted into late August 20176 and met with intense repression, including excessive force applied by riot police. Note that similar complaints of excessive force had been heard a few months earlier in Buenaventura, when the riot squad attacked protesters blocking access to the port;7 in that instance, people were smoked out of their homes with tear-gas bombs and other weapons. In both cases, the state used force to defend the investments, infrastructure, and access roads of the extraction barons.

In the case of Eco Oro,8 another multinational gold company operating in the northeast region of Colombia, the same dynamic is at play. The company (formerly operating under the name Greystar) is demanding $300 million from Colombia in its CCFTA arbitration claim. It says that it was cheated by a judgment of the Constitutional Court in which the páramos (high mountain plains) were declared to be protected zones off-limits to mining. The páramos are strategic ecosystems because of the large quantities of fresh water they contain.

“It’s always been clear, since the beginning of the Angostura project, that the constitution and the legal provisions protecting the páramos might affect the Santurbán páramo and that the project might not get approval. Countries shouldn’t be penalized for protecting their water resources in accordance with their domestic and international obligations,” said Carlos Lozano Acosta, legal counsel to several communities opposing Eco Oro.9

Another example is that of Glencore,10 which is demanding $400 million under a treaty with Switzerland. Meanwhile, Tobie Mining and Cosigo are suing for a whopping $16.5 billion under the trade agreement with the United States, alleging that they were awarded mining concessions in an area previously declared a natural park.11 This last case appears to have brought to light an instance of government corruption in Colombia.

The upshot of all this is that the government no longer has the right to protect a natural park or reserve from mining or hydrocarbon concerns, especially those that are driven by foreign investment. As several Canadian social movement organizations have been arguing publicly for two decades, trade agreements are stupendously one-sided affairs in which governments are barred from legislating to protect society, culture, the environment, trade unions, or even the national economic interests.12

Andrea Echeverry of the environmental NGO CENSAT points out that the companies do not have to make good on these threats: just making them is enough to put pressure on authorities, legislators, and public servants, who know that even if Colombia wins, it will be stuck with its own court costs. These officials will take special care not to damage their careers by making decisions that could get the government into trade-agreement trouble with foreign investors. In this way, the lawsuit becomes a pressure tactic in itself, irrespective of the arbitrators’ final decision. However, as Echeverry explained, the fact that the arbitration panels themselves constitute lucrative contracts for the arbitrators – high-level trade lawyers who move in the same circles as their clients – may well bias them in favour of the companies, especially if they wish to obtain future contracts. In short, these are essentially unilateral instruments of commercial law whose purpose is to protect transnationals while leaving citizens at their mercy.

The UN Forum on Business and Human Rights is slated to present a proposed an international legal framework in October 2017. As an important part of this effort, the primacy of commercial law over criminal and environmental law, or even the public interest, is likely to be challenged. A large number of social movement and human rights organizations have stressed the urgency of putting an end to the companies’ impunity, their absolute power to do what they want. As early as 2011, a report from the auditor-general of Colombia sounded the alarm about the risks of the prevailing economic model; it found that foreign companies take far more than they give and do not support the local economy at all: “for each 100 pesos of royalties that a foreign company pays, it gets 132 pesos in tax exemptions.”13 Now, in the cases discussed above, they’re demanding fabulous sums in compensation for allegedly foregone (but actually merely speculative) profits.

It is an unfortunate fact that socioenvironmental conflicts such as these are on the rise all over the world. In Colombia, five municipalities have already held public consultations in accordance with the current Constitution, which resulted in a rejection of all mining and oil development on their territories.14 These plebiscites demonstrate the people’s desire to base their regions’ development on small-scale agriculture. In 2017, large-scale social protest continues in the regions of Segovia, Remedios,15 and Buenaventura.16In Burcaramanga thousands took the streets to protect the Santurban Paramo. Meanwhile the residents of La Mata (Cesar department) and Pio XII are also standing in opposition to extractive operations, using roadblocks and other tactics.