Rios Vivos, a movement born in 2008 in opposition to the Hidroituango project, is touring Canada to demand an end to international complicity with the hydroelectric company's death practices. Like the current of rivers, which resist horror, peoples support dignity in every corner of the world.

"Energy Justice: Defending the Cauca River in Colombia" is the name given to this tour, which is currently taking part in the Rios Vivos Movement with the voice of Isabel Zuleta in Canada. The tour will take place in seven cities (Vancouver, Saskatoon, Montreal, Winnipeg, Quebec City, Ottawa and Toronto). As a movement of people affected by the Hidroituango megaproject, Rios Vivos comes to Canada to raise awareness, but more specifically to demand that the Quebec Deposit and Investment Fund (The Caisse) withdraw the funding granted to the company. Empresas Peblicas of Medellin, through a $300 million dollar loan through the Inter-American Development Bank (IDB).

Before Isabel Zuleta came, several people from different organizations in Montreal and across Canada came together to organize this tour. (...) [In Quebec, there is especially a campaign] "Let's wash the dirty hands of the cash." The tour met two main objectives that summed up the demands of the Rios Vivos Movement, that is to demand that the Caisse withdraw its funding and promote a reverse tour (of Canadian actors in Colombia) that would make it possible at the national and international level to make more human rights violations committed under the Hidroituango project.

In the first case, Rios Vivos requires the withdrawal of funding or, due to a failure of this first objective, that the funding be conditional on compliance with certain conditions. Quebec Deposit and Investment Fund says it has "green" investment policies and promotes development with environmental and responsible criteria for its investments. However, in the case of Hidroituango it is far from meeting this requirement.

Isabel draws our attention to the fact that this is not a matter of 'transparent financing', the terms of the loan (if any) are not accessible to communities, on the contrary, this information is completely obscure. In addition to being conditioned by Internet access, the loan is published in foreign languages, incomprehensible to the inhabitants of the affected country. And it must be transparent, since it is from access to this information that concrete requests and complaints can be developed, since the highlighting of missed commitments. If there is consistency with the so-called "green" policies, the Fund should withdraw its funding. If the Caisse does not withdraw or condition its funding, it is clear that it admits that there is a violation of human rights, it becomes complicit in it.

A little over a year ago, Rios Vivos filed a complaint with the IDB as part of the megaproject monitoring process. This complaint was filed by 477 of those affected by Hidroituango, requesting that the megaproject be investigated for damages caused, thanks to its funding. On October 18 this year, a letter of support with more than 4,000 signatures was filed in Washington requesting a response to this request for an investigation. When we arrived in Canada, another objective was for the country to sign and support this request for an investigation, to which no one had yet responded until the beginning of November. On November 10, the IDB Board of Directors announced the opening of the investigation. According to CIEL: "IDB Invest has invested millions of dollars in the project and facilitated the investment of an additional $1 billion from other international banks. These investments are being maintained despite the serious project crisis."

The second central objective of Isabel's tour is to generate a process of media articulation with the international press so that the reality of what is happening with the project is made massively more accurate. In Colombia, the modes of communication do not escape the problem of the interests surrounding the company Empresas Peblicas of Medellin, which has made the reality experienced in the territories affected by Hidroituango are almost completely unknown in the rest of the Country.

When the media were called to the 2012 demonstration [in Colombia], they said they would not leave because they risked losing their advertising model, says Isabel. And they added that "it is a political decision to create a media bubble", resulting in information absent in the regions and its selective dissemination by private parties.

"When they showed things, it's because it's absolutely obvious, like when the tunnel was covered (following the dam rupture) and 7,000 people were evacuated; there are 7,000 people who are not there, and it's so obvious that it's not going to show." The objective of Rios Vivos is to get Canada and other countries to go to Colombia so that the bubble is unlocked and that the national media are obliged to show the serious environmental and social impacts generated by hydroelectricity, as this is a financial problem at the extraterritorial level. At the territorial level, it goes beyond that, it is a problem that concerns life. 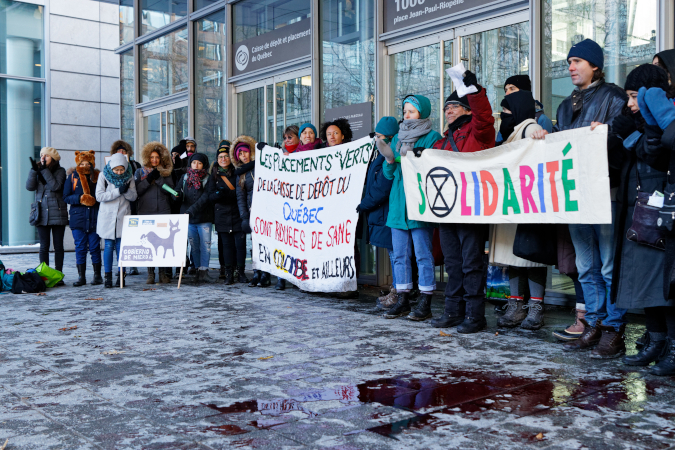 On November 13, a sit-in was held in front of the head office of the Montréal Deposit and Investment Fund to demonstrate the rejection of the "financing of a death project". Between French and Spanish, despite the -7 degrees and the imposing snow, it was heard in unison: "ORios para la vida, y no para la muerte! Rivers for life, not death! Yo tena mi casita, y la Caja me la quita! Solidarity!

Despite the fact that the tour's organizing committee repeatedly sent letters requesting a meeting with Isabel, the Caisse did not grant them. During the demonstration, a spokesperson for the Caisse made an appearance and received letters and documents addressed to the Caisse to denounce the situation. Following a visit to the National Assembly of Quebec (with the support of Quebec Solidary) and a few articles in Quebec's mass media that came out following the rally, the Caisse answered the call and agreed to meet with the spokeswoman of the Rios Vivos Movement at the end of November.