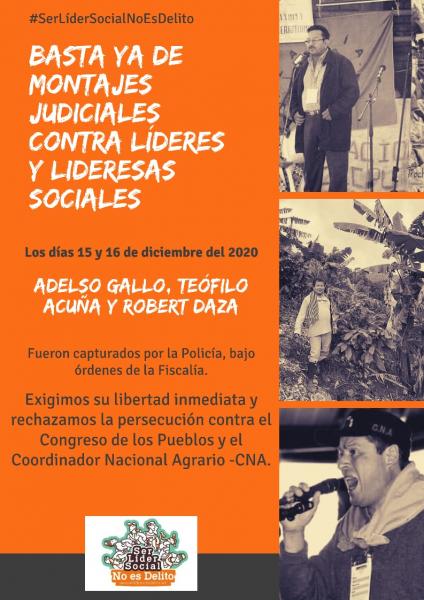 From the Centro Oriente region, state forces have captured our comrade and peasant leader, Adelso José Gallo Tozcano. He is a member of the National Peasant Association José Antonio Galán Zorro (ASONALCA) and the National Agrarian Coordinating Committee (CNA), participating in the different achievements and struggles of the peasant movement at the regional and the national level. Adelso is a spokesperson and intermediary at the roundtables for dialogue established between the movement and the national government in the context of the Cumbre Agraria, Campesina, Étnica y Popular (Agrarian, Peasant, Ethnic and Popular Summit) emerging from the National Strike of 2014. He has been an outstanding leader in the struggles against oil corporations operating in Arauca, denouncing Repsol, OXY and BP at the international level at the Permanent People’s Tribunal.

In the south of Bolívar, Teófilo Acuña, leader of Sur de Bolívar and the National Agrarian Coordinating Committee (CNA) has also been arrested. Teo, as we know him, is a resolute defender of human rights, respected leader, and representative of thousands of peasants who depend on small-scale agriculture. He has defended lands across the state of Bolívar from the impact of transnational mining companies such as AngloGold Ashanti and has created alternative forms of community development in the region, which have suffered constant persecution and stigmatization.

In Nariño, Robert Daza, a member of the Committee for the Integration of the Colombian Highlands (CIMA) and the National Agrarian Coordinating Committee (CNA). Recognized for his social activities and community organization, his work has been characterized by the creation of agroecological transition projects, an exercise in solidarity economy with the peasant communities, as part of the proposal of agricultural territories, food sovereignty, and peasant government. He is internationally and nationally recognized for his political and social work.

These arbitrary detentions are part of the systematic persecution of social movements by the Colombian government. In addition to the long list of comrades who have been assassinated across the country, there are many others who — for their social work, creative thinking and action, and proposals for creating dignity in life — are put on trial and imprisoned by the Colombian regime. The Colombian state uses legal processes to delegitimize the Congreso de los Pueblos, making political use of the investigative and judicial bodies to deprive social leaders of their lives and their freedom, not to protect them.

The Congreso de los Pueblos calls on all social forces of solidarity to make a public statement. Every time they try to strike down social and popular movements, we will face it standing up and we will continue to seek the Vida Digna for our country. We demand the immediate freedom of our comrades, and we call for continuous mobilizations in the streets and highways of Colombia until this oppressive government falls.