The Canadian oil company Enbridge has the largest oil pipeline grid in the world, which includes the oil pipeline between Canada and the United States. The company is also championing the 1177-km Northern Gateway megaproject in British Columbia, slated to carry Albertan tar sands oil to a deep-water port on the Pacific. The Northern Gateway project has been challenged in no uncertain terms by the region's Native communities since it is projected to run across their land. In addition, Enbridge plans to reverse the flow of oil in certain Eastern Canada pipelines so as to export tar sands oil from Western Canada to the US Eastern Seaboard. It applied to the National Energy Office in October 2012 to reverse the oil flow in the pipeline running from Sarnia to Montreal. Enbridge also wants to increase the volume of oil in the pipeline to 300,000 barrels a day.

Since 1994, Enbridge has owned a quarter interest in the 800-kilometer OCENSA pipeline, one of the largest Canadian investments in Colombia. OCENSA carries 500,000 barrels of oil a day produced by the Canadian company Talisman Energy. Talisman Energy is known in Québec for its involvement in shale gas.

In the October 1998 issue of its newsletter, Amnesty International exposed the ties between OCENSA and political violence in Colombia. In order to protect its facilities, Enbridge hired the British military corporation Defense Systems Colombia (DSC), which was providing military hardware to Brigade 14 of the Colombian army. That brigade was then under investigation for multiple crimes perpetrated in collaboration with the paramilitaries, including the massacre of 90 civilians in Segovia in 1998.

Today, the oil pipeline is flanked by 17 military bases with a total of 1400 soldiers protecting it. In addition to the political violence engendered by the efforts to secure this pipeline, the pipeline installation itself destroyed the livelihoods of at least 350 peasants, who were forced to abandon their contaminated land. 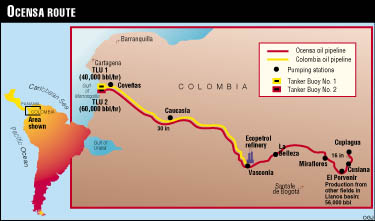 Projet Accompagnement Solidarité Colombie (PASC) toured the Boyaca region in March 2013 gathering testimony from residents who complain about the rise in paramilitary activity in their midst. The paramilitaries have been highly visible since the construction of the pipeline, and there has been a parallel increase in drug trafficking and cocinas, or clandestine laboratories where coca leaves are processed into cocaine, since OCENSA. The drugs are shipped to North America through Panama or Costa Rica. The cocinas and their attendant violence are now common here, despite the fact that almost no coca is grown in this region of Colombia.

Another example of these Canadian companies' tolerance for criminal activity – indeed, their complicity with it – came to light in October 2011 when Hector Buitrago, a paramilitary leader in the region, was brought to trial for the 2002 kidnapping of a trade unionist, Gilberto Torres, who led the Union Sindical Obrera (USO). Buitrago stated that his militia had been commissioned by OCENSA and the Colombian oil company Ecopetrol to kidnap Torres because of his union activities. In the course of this trial it was also learned that OCENSA later paid this same militia to assassinate Torres (Fundación Comité de solidaridad con los presos políticos, 25 October 2011).

Moreover, several women in the region have noted a significant rise in sexual violence and juvenile prostitution in the vicinity of the pipeline. According to a 2011 Amnesty International report, Colombia’s security forces, paramilitaries and guerrilla groups have all targeted women and girls to exploit them as sexual slaves and to effect revenge on adversaries. Sexual violence sows terror within communities and forces whole families to flee their homes, allowing land to be appropriated. Amnesty says that people living in areas with strategic importance for the parties to the conflict, or people who speak up to defend their interests against mining, energy, or agroindustrial interests both domestic and foreign, are particularly vulnerable to rights violations.

In 2012, Enbridge planned to extend the OCENSA pipeline and to begin work on new oil pipeline to send Colombian oil to Asia via the Pacific coast. Canadian oil companies have also received attractive “security” guarantees. During a tour of Canada in 2010, the Colombian national hydrocarbons agency promised Canadian investors to set up a new military battalion to protect foreign companies engaged in resource exploration. To date the Colombian military has not been protecting exploration, only production. What does this increasing militarization of economic activity portend for Colombian communities? The Colombian taxpayer is paying to protect foreign investments so that a handful of companies, some of them Canadian, can salt away enormous profits on the backs of local residents.