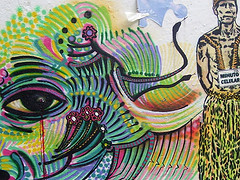 We are grateful for your solidarity and support in the lobbying campaign fighting to make sure that Carlos Alberto Pedraza’s assassination does not end in impunity.

We are glad to announce, through a communiqué released by the People’s Congress, that with the help of many people and institution’s joint actions, there will be further developments in the case. The file has been transferred to Bureau 98 of the Human Rights and International Humanitarian Law Unit of the State’s Attorney General’s office.  This is an important step, but only the beginning of a series of necessary actions in order to identify the people responsible for this crime.

Following are details concerning Carlos Alberto’s case and information related to the case of Alexander Tibacuy Luguado, arrested shortly after Carlo’s assassination.   This second case seems to be part of the same wave of persecution directed at the social movements in Colombia.

We hope for your support during the next steps of this fight for justice and against impunity.

As the People’s Congress, with help from allies and organizations worldwide, we denounce the forced disappearance and murder of Carlos Alberto PEDRAZA SALCEDO on January 21.  Since his death, we have asked for the case to be transferred to the State Attorney General’s Human Rights Unit.  It is an important request as it could allow for political motives to be considered for the investigation.  Furthermore, this could allow special attention to evidence, including Carlo’s work as a human rights activist.

Thanks to the wide denunciations generated by his assassination, the pressures applied by institutions, NGOs and embassies, as well as the public statements made, such as the one released by the Inter-American Court of Human Rights and certain UN institutions, we can now share one good news: the transfer of the case has finally been made!

The legal investigation team in charge of the case is awaiting response regarding the request for a reconstitution of the body’s removal.

Since the first phone calls announcing something had happened to Carlos, a series of vague and malicious events followed.  These first calls described a motorcycle accident or a hit to the head.  When the official report was published, the forensic doctor confirmed that he died from a gunshot to the head.

There is limited information concerning the location where the body was found.  Still today, the final reports that would clarify the facts have not been received.  A reconstitution with the presence of the First Responder who was in charge of the body’s removal is necessary in order for the facts to be clear and for the research to help identify the people intellectually and materially responsible of the events.

Obtaining justice in this case is crucial for organizations that are part of People’s Congress in order to certify certain security measures for the execution of their activities.

One month after the forced disappearance of Carlos Pedraza, on February 23 2015, Alexander Tibacuy, member of the same regional organization, was arrested by law enforcement.

The detention was formalized by an order coming from the specialized attorney no. 9 (Fiscal 9 Especializado) related to the Estructura de Apoyo de Arauca – EDA.

On February 24, the hearing was held in private on the request of the prosecutor’s office.  The judge legalized the detention and Alexander Tibacuy was charged with conspiracy as well as funding of terrorist and rebellious groups.  A pre-trial preventive detention measure was also imposed.

Alexander is one of the social leaders implicated in the fight against oil companies’ actions in the territory of Arauca.  With other social militants, he has amongst others filed a criminal complaint against the transnational company OXY and CORPORINOQUIA for environmental damages caused by oil drilling in Arauca.  This complaint is more specifically directed to OXY’s exploitation in the Laguna del Lipa as part of the Chipirón project.  This exploitation has caused severe environmental impacts, destroying flora and fauna as well as violating sacred sites of indigenous communities living in the territory.

Alexander Tibacuy Laguado, a well-known social leader of the region, is a spokesperson for the communities at the Inter-Sectorial Commission for the Promotion, Respect and Guarantee of Human Rights in the Department of Arauca, where more than a dozen governmental authorities participate at regional and national level.

These facts are added to the series of threats and persecutions.  It is fundamental to obtain justice in these cases in order to assure protection for our movement as a whole and Colombia’s social movements.  Breaking with impunity and generating guarantees of security is a key foundation for the construction of the peace we have committed to build.

A fast and thorough investigation to find and sanction the people responsible for the murder of the activist Carlos Alberto Pedraza Salcedo and offer full reparation for the victim’s family.  This investigation needs to include, as a first step, the reconstitution of the collection of the body.

The immediate release of Alexander Tibacuy Laguado since his detention is arbitrary and constitutes a violation of the rights to freedom of opinion and expression, as well as freedom of association.  His detention represents an act of intimidation and persecution against an environmental activist and social leader in the Center-East region of the country.

The implementation of immediate security measures to protect the life and physical integrity of members of the People’s Congress.

The study and sanctioning of the violations of human rights caused by the development of mega mining and energy projects.