In Bosa, the ancestral territory of the Muisca peoples, the National Popular Assembly was held with the participation of more than 2,000 in-person and virtual delegates from different regions of the country, in an autonomous and self-organized exercise. It included representatives of peasant and black communities; indigenous peoples; women’s movements and grassroots processes; popular assemblies and cabildos; popular urban organizations; workers’ organizations of the productive, educational, health, and transportation sectors; social, political, environmental and human rights movements; Colombians outside the country; cultural, artistic, sport, and communications processes; youth and student organizations; ethnic, peasant, and popular guards; frontliners; victims; sexual dissidents and diversities; disabled peoples’ movements; and the communal movement. 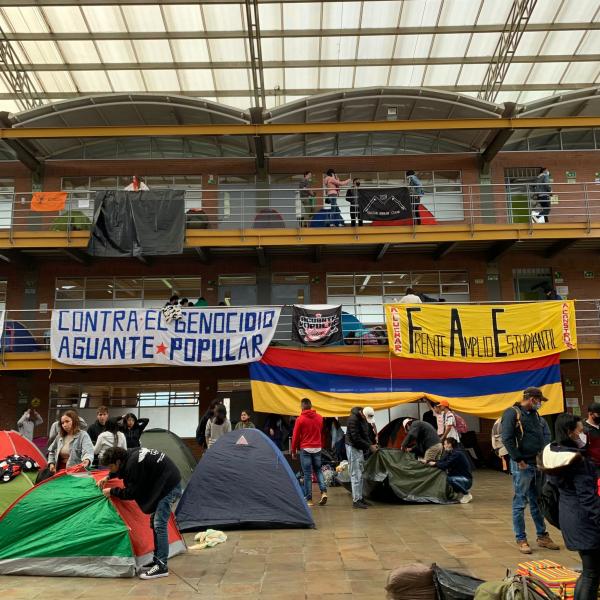 The National Popular Assembly (ANP) declares itself as a permanent process that constitutes itself as a body of popular power built by territorial organizations and different sectors of the population to strengthen and develop self-governments (gobiernos propios), life plans (planes de vida), as well as consolidate ethnic, peasant, and popular urban territories and territorialities and also leads the struggles of the people.

In order to continue moving towards a change in the correlation of forces, we must strengthen ourselves politically and organizationally and move forward an indefinite national strike. This ascent of popular and democratic struggle is going through a historic moment that started on November 21, 2019, continued through 2020, and became stronger and more belligerent on April 28, 2021. This will allow us to continue fighting against the imperialist, patriarchal, racist, colonial, and neoliberal capitalist system that is under the rule of the International Monetary Fund (IMF), World Bank, Organization for Cooperation and Economic Development (OECD), and the authoritarian and dictatorial regime headed by the Duque government. The ANP struggles to find a path for building and establishing popular power.

After April 28 -- in addition to bloody persecution -- the government, capitalists, and landowners unleashed a defamation campaign against the blockades and the youth that they qualified as vandals. The ones looting the country cynically call themselves “good people” (gente de bien) and try to make the crowd that defend rights, democracy, and justice look like criminals. We reclaim, celebrate, defend, and unconditionally support our youth, men, and women: the popular heroes. They will be remembered for this libertarian gesture of the Colombian people.

We decided to multiply the resistance points (puntos de resistencia) and blockades. They -- along with the protests, marches, rallies, politico-cultural acts, and other initiatives of popular creativity -- have been key to the success of this uprising.

We call for a national mobilization every Wednesday until the next session of the ANP. We especially invite the labor union movement to create the conditions for a strike in production, services, and transportation.

From the collective creativity of our communities and peoples, as well as in recognition of the diversity of ancestral, cultural, gendered, generational, historical, and sociopolitical views and worldviews (cosmovisiones), we are formulating a platform that contributes to guide the struggles of the Colombian people, in order to achieve the transformations that will make way for a country of Dignified Life (Vida Digna). It should continue debating and deepening the following: i) a transformation of the State towards a government of workers, peasants, popular movements, and peoples; ii) a transition economy rooted in public funding for state-owned, social, and communitarian companies that dismantle the State’s neoliberal economic agenda and guarantee a Dignified Life through taxation, work, social security, education, housing, public services, and environmental, mining, energy, and agrarian policies; (iii) a defense of the territories and popular social sovereignty of peoples, as well as ethnic and peasant communities; (iv) a defense of women and diverse sexualities in order to eliminate the patriarchy.

We also want to move forward with a plan to strengthen the national and international ability to denounce and protect human rights. This will have a special emphasis on the self-protection of life, organizations, and territories by strengthening the ethnic, peasant, and popular guards, as well as the front lines. We declare the Portal de la Resistencia as a humanitarian space and permanent encampment of the Front Lines.

We seek accompaniment and international oversight to guarantee our right to protest. We call on the Colombian State to: comply with domestic and international human rights laws; dismantle the National Security Doctrine and the doctrine of the internal enemy; repeal Decree 575 that covertly declares a state of emergency; free all of the people detained and prosecuted in the context of the National Strike; safely and securely return all of the disappeared peoples; and investigate and sanction the people responsible for the thousands of crimes against the Colombian people.

We call on the international community to break diplomatic relations and support for the Duque government. He should be tried for genocide in independent International Tribunals because the Colombian institutions in charge of rule of law, public service, and the protection of human rights have guaranteed impunity for crimes committed by those in power. The Colombian people demand the fall of the genocidal regime and its illegitimate government headed by Duque, whom we categorically qualify as responsible for the physical and symbolic annihilation of sectors demanding structural changes that guarantee a Dignified Life for the entire population. 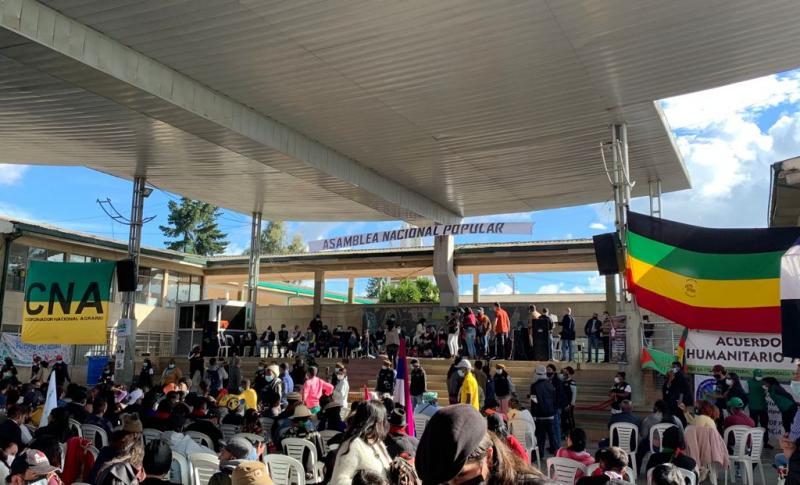 We agreed on a route for contributing to the strengthening of unity within the popular and democratic sectors. It is based on the recognition of the experiences and initiatives of sectoral, thematic, territorial, national, and international coordination and articulation. In that sense, we call on the strengthening and generalization of popular assemblies in neighborhoods, towns, universities and companies. We reject the hegemonic and bureaucratic practices of the National Strike Committee (Comite Nacional de Paro, CNP) that conducted a negotiation with a genocidal government and thereby turned its back on the majority on strike. We call on them to limit their role and not claim to control the national strike. the regions have the autonomy to articulate with the Departmental Strike Committees, the ANP, as an autonomous process, does not articulate with the dynamics of the CNP.

We thank the educational community of the Claretian School for welcoming us and offering their space for the Assembly. We express our solidarity and condemn the violation of their autonomy by the regime’s repressive forces, who violated their facilities to land a helicopter used to repress the points of resistance in Bogota.

We call on the popular movement and Colombian people to participate in the second National Popular Assembly in Cali from July 17-20, 2021 in order to continue strengthening popular power through popular democratic exercises that guarantee the implementation of majority decisions and continue debates regarding differences.

TODAY THE SCREAM IS NOT FOR THE GOAL, IT IS FOR THE DIGNITY AND RESISTANCE OF THE COLOMBIAN PEOPLE