Since April 22nd, mobilizations continue in Colombia; this time it is the peasant, black and indigenous communities that will take the roads to oppose the government's National Development Plan (NDP).

The Minga, a social camp of the indigenous and peasant communities of Cauca, ended recently after 27 days of blockades reacting on the decision of President Ivan Duque to sit at the table. However, on April 9th, the president, who was only a few hundred meters from the meeting, decided to turn back leaving his "chair empty".

A National Development Plan under the sign of the extractivism

Many actors in Colombian society reject this plan that should be adopted by the Congress before May 7th. Although Colombia committed to reduce emissions at COP 21, its development plan is based mainly on the extraction of natural resources, oil, coal, and hydroelectric dams. 90% of these extractive resources are for export, offering such generous tax incentives to multinationals, that Colombia sells these resources at a loss.

Communities living in territories affected by these mega-projects organised popular referendums that were later found invalid by the Constitutional Court, as elsewhere in the world where it's considered that energy exploitation is not an issue that can be left to the goodwill local authorities or communities.

These policies, which will deepen the environmental crisis, provoke outrage as Colombia suffers directly from the consequences of climate change, between flood and intense drought that are causing the loss of harvests, deadly landslides and desolation.

The NDP is also a direct attack on social rights. One of the plan's objectives is to transform the peasant economy in rural areas and to change peasants into workers. 63% of the Colombian working population is considered to be working informally, since it does not grant basic social rights such as the minimum wage. The NDP creates a new formula of "self-employment" to formalize these activities, in short, it legalizes paid work below the already ridiculously low minimum wage (250 USD per month). Other direct attacks are on pension funds, health and education, which are expected to aggravate problems caused by the waves of privatization.

The NDP's section on the implementation of peace agreements, signed in 2016 between FARC insurgency and the Colombian government, is a rewrite of the President Uribe's (2002-2010) democratic security policies based on the militarization of territories and on the security of foreign investments.

This Plan, like all of Ivan Duque's Government Policy in office since August 2018, does not recognize the agreements nor the negotiation processes initiated by the previous government with different social actors. 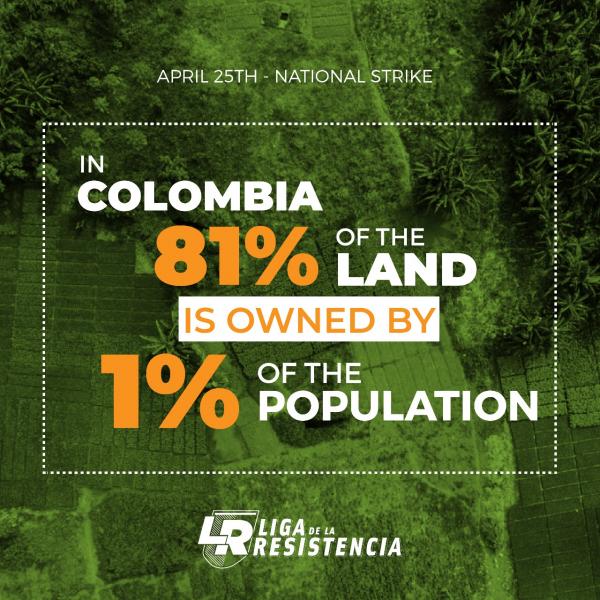 Whether we talk about negotiations with peasant, afro and indigenous organizations gathered at the agrarian summit, or the agreements reached at the end of the December 2018 student strike, or the agreements with teachers' unions, this government has shown no intention of respecting these agreements nor carrying out policies concerted with social actors.

The social policies included in the peace agreements between the FARC and the Colombian government in 2016, had generated expectations, but the very essence of these agreements are in danger. After the referendum for peace lost by a few thousand votes in 2016, the Parliament has gradually reduced the scope of the agreements, and now the transitional justice system itself could desapear. While Jesus Santrich, one of the FARC's negotiators, has been jailed for a year without evidence awaiting for extradition to the United States; Ivan Marquez and the "Paisa", two other FARC leaders, have "disappeared" , all while the few senators and FARC representatives are doing their best in parliament to save these agreements.

While "peace" with the FARC is mistreated by the government, open war against social movements continues. The assassinations of social leaders and the criminalization of activists fighting for the defense of their territories seem to be constantly increasing.

Killings go unpunished, while the justice system jails people who oppose the policies of the government using judicial frame ups, generally associating them with armed insurgent movements and sometimes even with narcotrafficers in order to isolate and discredite them. Usually, people are released after trial, however, a new reform of the judicial system has pushed the limit for pre-trail detention from 1 to 3 years, creating a perfect context to criminalize the opposition.

On the roads, in the streets, and squares

Since April 22nd the USO Petroleum Union, the communities of the Arauca Department and Vichada block oil wells of OXY and Parex, both US and Canadian companies. Also, the communities of Sur de Bolivar, Catatumbo, Antioquia and Cauca have been mobilizing since 23 April. And now on the April 25th, the trade union centers and the students will join the mobilizations.