Different organizations, movements, peoples and individuals, who believe in a dignified and just Colombia, declare a Humanitarian Emergency.

We invite you to join this initiative, which seeks the following objectives: 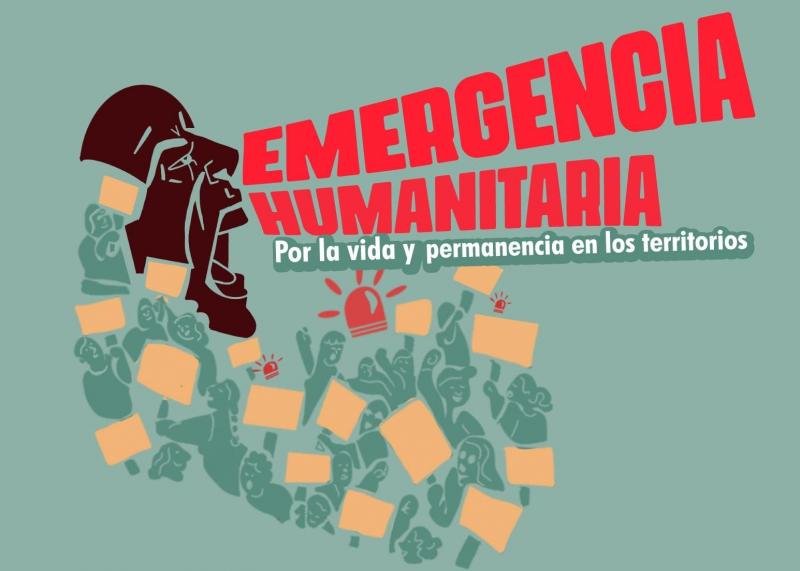 In the last period (2016- 2021) in Colombia, the popular movement, the peoples and diverse social sectors have been advancing actions and mobilization campaigns to confront the genocidal practices of the State and the classes in power, which seek to weaken and exterminate any expression of protest and transformative social organization.

Today, in the midst of the worst social and environmental crisis, famine and the reparamilitarization of all regions of the country, the social and popular movement is facing a structural and strategic threat. This requires us to generate joint alternatives that allow us to develop exercises of denunciation, self-protection and collective care.

The violent and systematic acts that have been perpetrated against social movements; workers' organizations; community, neighborhood, youth and university processes; native peoples; diversities and the entire popular class, have increased as the capitalist system deepens its crisis. This has generated social protests that seek transformations of the current state of affairs and that are multiplying around the world.

In the 2016-2022 period (in the midst of the militarization of the country), the murder of social leaders has exceeded 1,300 cases, as reported by the Institute for Development and Peace Studies (Indepaz). Likewise, the Risk Monitoring departement of the Integral System for Peace, led by the Investigation and Indictment Unit (Prosecutor's Office of the Special Jurisdiction for Peace), a total of 323 ex-combatants who signed the peace agreement of the former FARC-EP suffered the same misfortune.

The violation of human rights in the midst of the National Strike of 2021 (28A) -according to the non-governmental organization Temblores, Indepaz, Amnesty International and the United Nations- resulted in approximately 100 murders, most of them perpetrated by the public forces. In addition, it caused serious eye damage to more than 100 young people, 60 cases of sexual and gender violence, and 129 forced disappearances between April 28 and May 28, 2021 alone. Likewise, the security forces arbitrarily detained thousands of people. After the strike, the criminalization of social and popular protest increased, as well as the prosecution of leaders throughout the national territory.

The year 2021 ended with the chilling figure of 95 massacres, which resulted in 334 deaths.

Between January and February 2022, 22 social leaders were assassinated in the country, which shows that it is the result of a systematic practice, a policy of extermination and annihilation of social processes at the national level. On the other hand, the massive forced displacements caused by the paramilitary presence in the territories is happening on a daily bases, and that has not had any type of response from the national government.

3. What is the Humanitarian Emergency (HE) and why do we declare it?

- The HE is an autonomous proposal and response from social organizations. It is an instrument of political action for the visibility and denunciation of political genocide, impunity and the crisis unleashed by capitalist, colonial and patriarchal hegemony.

- It is a mechanism of care, self-care and defense of life and dignified permanence in the territories.

- In spite of the fact that the HE is an autonomous proposal, whose declaration implicitly delegitimizes the role of the Colombian government, we will advance interlocutions with the state in defense of Human Rights and with a focus on legal and political enforceability.

The HE will prioritize national and international popular diplomacy. It also seeks dialogue and support from social organizations and multilateral human rights organizations that, by supporting and legitimizing the declaration, exert pressure in favor of the protection of the social movement in Colombia and its leaders.

To join this declaration, you can do it through the following form: