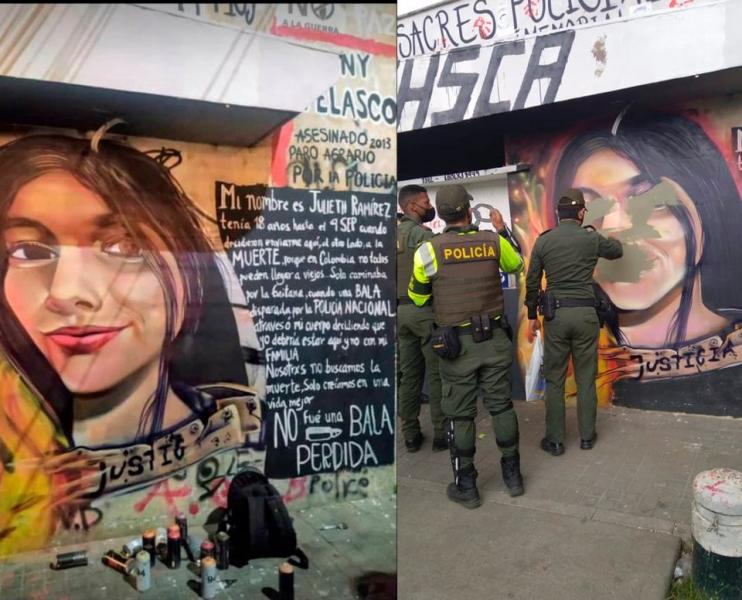 Being Colombian and living in Colombia at this time,looks like a terrible picture of history, and realizing that although the years pass, the landscapes and characters portrayed mutate, change their appearance, but do not alter the original order of the image. In other words, the genocide we are witnessing today, is a photograph of the genocide that has shaken the country for decades, but the demise has also been an institutional policy, and that has a special weight today.

Based on information provided by the human rights organization INDEPAZ1 , in the course of 2020 there have been around 55 massacres in which nearly 218 people have died in 18 different departments in Colombian. The majority of deaths are attributed to illegal armed groups with paramilitary structures that never demobilized. Today, these groups act as if they were not part of a unified command structure and control routes for trafficking of drugs, arms, and people. Despite the alarming figures, this report was published days before the September 9 massacre in Bogotá, where the National Police killed at least 11 people with firearms and seriously wounded nearly 170, who were protesting the murder of lawyer Javier Ordoñez2.

The tragedy repeats itself as if suspended in time, the victims are diverse and at the same time share the same profile: leaders who promote alternatives to the capitalist economic model, who oppose mega-mining and mega-projects, people who signed the peace agreement and decided to lay down their arms to build other roads, young students who are accused of belonging to subversive groups, women and gender dissidence suffering permanent waves of violence, victims of the armed conflict who were displaced by paramilitary violence and today demand the restitution of their lands3.

In this regard, in one of his key texts, Daniel Feierstein points out that genocide is a social practice4 because it involves (by action or omission) different actors in society and not only the direct perpetrators. In that sense, there is a fundamental element there, a genocide is consolidated when a part of society considers it legitimate and therefore think it is acceptable and necessary to exterminate certain groups to establish a desired social order. The narrative of the war in Colombia has managed to position itself with such a level of systematization that on many occasions the very construction of national identity is based on the ignorance of the other as different, denying their individual or collective condition, deciding on their life, considering it as "something" that can be exterminated.

One of the strategies used to deny this "different other" is the construction of media euphemisms that blur the meaning and magnitude of this reality that overflows fiction. Thus, President Iván Duque, in recent statements, affirmed that "collective homicides" are occurring in Colombia, but not massacres5 . This makes evident the permanent attempt to hide the social and political crisis that the country is going through, ignoring a history of massacres appeared in the 1990s. During that time paramilitaries and the Colombian Army discovered that massacring communities was much more effective to intimidate and sow terror on the opposition.

During the September 9 protests in Bogotá, hundreds of protesters burned down several police stations (CAI) in different neighborhoods, the accumulated outrage over the precarious conditions that became visible during the quarantine found a trigger in Ordoñez's murder, and the streets burned. Although the official media did not reveal all the information, the country learned that many of the incinerated stations have ongoing complaints of arbitrary arrests, sexual violence, murders, and links to drug trafficking gangs, among other crimes.

The next day, September 10, the communities of the neighbourhoods turned to artistic actions to give a new meaning to the police stations consumed by the fire. Little by little neighbours gathered with books, plants, paintings and music, these physical and symbolic places of "authority" were converted into community libraries, cultural centers, spaces of creative experimentation, their voices said with force: "No more centers of torture, yes to the cultural centers". In some places the police returned, censoring the images that evoked the memory of the victims6 , and the community filled the spaces again with colour7.

This is another testimony of the dispute of memory against oblivion, a fight that happen in the streets and with diverse tools. There are no guarantees of justice for the victims and their families, no guarantees that genocide will end in Colombia, however it has become clear that there are alternative stories, vanishing points, powerful creations that rebel strongly against the frame of war that repeats itself as a genocidal spiral. The film has not yet been produced , there are still many stories to be told fortunately, the people also have their own lights.