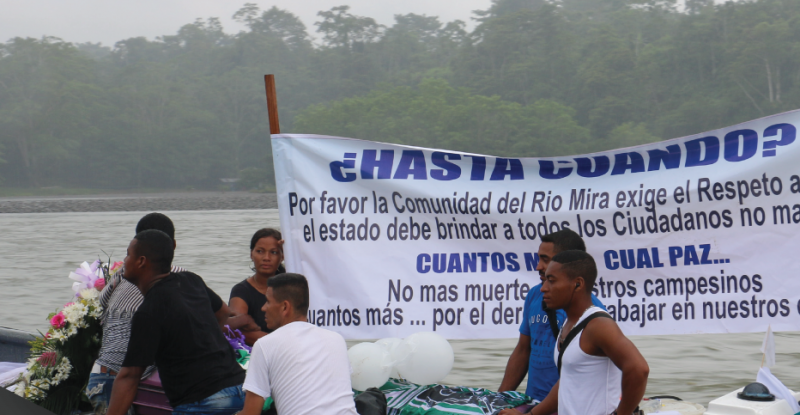 The First Report was released on the Situation of Human Rights after 50 days of the Bilateral Cease Fire of a Temporary Nature between the National Government and the National Liberation Army –ELN-, produced by a process of oversight from the social organizations. We published a summary in ENGLISH, the complete version is available in Spanish.

Last September 4th, the National Government and the ELN agreed to implement a National Temporary Bilateral Ceasefire (NTBC from here on), with the purpose of reducing “the intensity of the armed conflict” and bettering the humanitarian situation of the population.

We confirm and highlight that in the first fifty (50) days of the NTBC the intensity of the armed conflict has decreased since there have not been armed confrontations between the military forces of the State and the guerrilla ELN. However, one of the central objectives of the NTBC, to better the humanitarian situation of the population, has not been fulfilled and the facts here show that.

The complete report has graphics and emblematic case studies such as the massacre that agents of the National Police supposedly carried out in the municipality of Tumaco in the Department of Nariño. In the midst of a protest against forced eradication that the National Government was carrying out, 7 peasants and indigenous people were assassinated, and more than 50 were injured. Or the case of the assassination of the indigenous governor Aulio Isaramá Forastero in the department of Chocó, an incident that the ELN publicly recognized and for which it asked for forgiveness to the family members; and that humanitarian crisis generated in the zone.

“The violence must cease toward the civilian population” is the principal demand of the social movement.

From October 1 to November 20, we registered a total of 299 individual victims, 45 of which were homicides, 96 people injured, 35 victims of individual threats and 25 collective threats. Of the 45 homicides, 5 incidents are registered in which the life of 11 ex-combatants lost their life – guerrilleros of the FARC, 6 of them in one massacre. It is important to note that the situation has been like this since the month of April 2017. Between April 14, 2017 and November 11, 2017, 31 members of the FARC-EP were assassinated in the process of reincorporation, like the homicide of 12 family members. Of the 45 homicides, we find three massacres that produced 16 victims. 9 of these homicides were perpetrated in the context of social protest. During the NTBC between the ELN and the National Government, more than 129 victims of aggressions were registered in the context of repression to social protest. The social organizations reported 90 people injured, 9 homicides and 14 individual threats. In agreement with the denouncements compiled in this report, the responsibility for 73% of the victims is attributed to agents of the State, to unknown authors 17%, paramilitaries 8% and the ELN 1%.

The actions carried out by the paramilitary groups are without a doubt one of the principle challenges to keep in mind for the success of the proposals drawn up during the Cease Fire. There is a great number of cases in which the possible material author of the incidents is unknown and for which, the context in which they occur, or because previously they had been threatened by these groups they are attributed to the paramilitaries.

During the period studied, it was registered that 84 people deprived of their freedom were also victim to cruel inhumane, degrading treatment and threats; To date, of the 3,774 political prisoners who are members of the FARC-EP, 2,978 have been released. With worry and preoccupation, we observe the growing aggression against the political prisoners, especially those that pertain to the National Liberation Army –ELN-, in the face of the stigmatizations and the retaliations that are being perpetrated against them.

Violent treatment of social protest during 50 days of the NTBC

From October 1 to November 20, 2017 the period of analysis of the report, there were various days of mobilization and protest; the Days of Indignation, the Minga for Life and the Indefinite National Strike against the policy of substitution of crops, amongst others. The protagonists of the exercise of this right were indigenous and afro descendant people; peasant communities and urban dwellers with their own demands about their social issues.

The defined treatment by the National Government was the same that historically has been deployed against protest; the stigmatization, intimidation, disproportionate use of police force and the use of the military forces. In Nariño, Cauca, Caldas, Huila, Catatumbo – North Santander, Arauca, amongst others, the abuse of Public Force, the use of non-conventional arms, stigmatization and persecution to the population, and the failure of the government on a local and national level to follow through with the agreements it made with the community was denounced.

Some conclusions of the report:
The Colombian State continues in its failure to follow through on its commitment to protect social leaders and human rights defenders.
During the NTBC there were grave violations of Human Rights and International Humanitarian Law by the public force and the paramilitary forces in peasant and indigenous territories
The repressive answer by the State to the social protest during this time period, is contrary to the will expressed by the government of the country.
There are no policies nor concrete actions of struggle against paramilitarism.
The grave humanitarian in the prisons and the inhumane and degrading treatment to the population that is behind bars persists.
The government continually fails to fulfill its commitments in the implementation of agreements with the FARC.

Some recommendations:
Both sides should subscribe to the principles of International Humanitarian Law, especially the principle of the distinction of the civilian population and avoid any type of stigmatization and attack against the civilian population
The Colombian state should implement the measures and policies that work towards the real and effective and ensure guarantees to social protest and political opposition.
The State should fulfill what was agreed on in the agreements for ending the conflict with the FARC, especially related to guarantees and the fight against paramilitarism
The State should assume its responsibility for the action and omission of its agents in grave violations to human rights and infractions to International Humanitarian Law and move forward quickly the investigation, sanctions and cleaning out the institutions
The Colombian State should respect the prior consultation of the peasant, black and indigenous communities in relation to the policy of illicit crops and the other issues that affect them
Urgent measures should be adopted that deal with the grave humanitarian situation in the prisons.

Organizations that endorse this report: 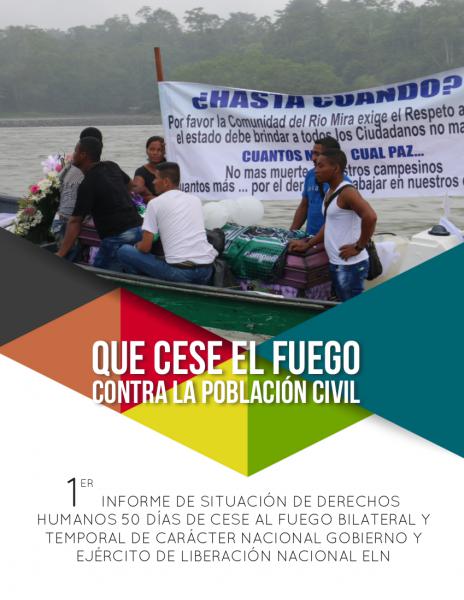