By Mauro Giormenti, in Columbia. The entire Department of Arauca is under a general strike against the government, the multi-national oil companies, and the repression of civil resistance to the visit by President Santos to the region.

February 14th the entire Department of Arauca, Columbia began a general strike for an indefinite time. All entrances to the department as well as many internal roads are now blocked and picketed by hundreds of peasants, Indians, workers and students demanding the state and multi-nationals to come up with a solution to the “humanitarian and social” crises. The national government immediately dispatched one thousand troops of the Riot Control Squad (ESMAD- Escuadrón Móvil Antidisturbios, in Spanish) in an unsuccessful, for the moment, attempt to suppress the strike. 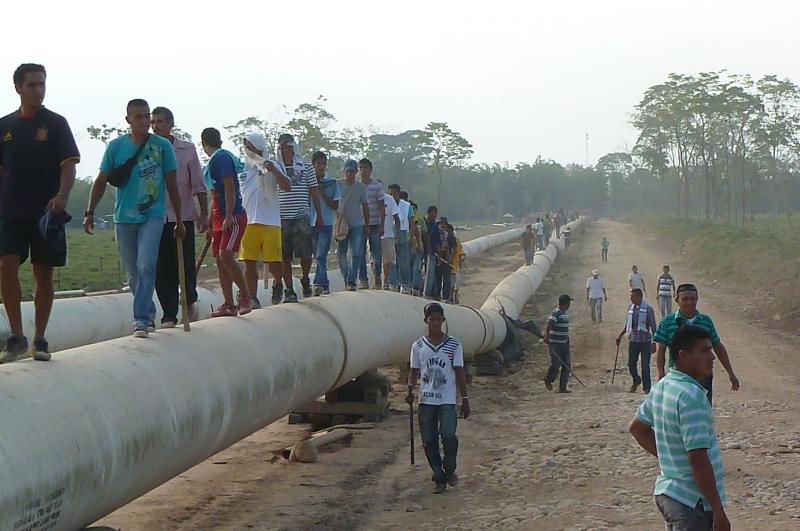 Arauca is on the border with Venezuela, it has the richest petroleum deposits in the nation. This has brought many transnationals to establish a presence in the region. “More than 30 years of oil exploration and exploitation in our region, has been the cause of environmental catastrophe, plunder, aggression against Indian communities and the humanitarian and social crises,” states the Peoples Political Movement of Eastern Central Columbia (Movimiento Político de Masas del Centro de Colombia, in Spanish) in its grievances pamphlet.
The demonstrators accuse the Columbian government and the multi-national oil companies, demanding they assume “payment of the social, environmental, and humanitarian debt imposed upon the Araucan and Eastern Central Columbian people.” The Aruacans had already mobilized before with the same demands in April 2012; they stopped their protest temporarily after signing a statement of agreement. The agreement promised a presidential decree opening up venues of dialog on the subjects of: Indian problems, human rights, environment, territory, productivity, public works, social services, and would grant legal negotiating authority to the organizations to require the government to comply with and implement those agreements. After waiting in vain for a year, the Aruacans mobilized again, this time in a civil general strike paralyzing the entire department.

Throughout the department there are groups composed of hundreds of organized men and women blocking roads with absolute effectiveness. They are mostly concentrated at the multi-national oil extraction sites or on the Bicentennial oil pipeline. However, they allow the importation of commercial shipments of food two or three times a week, so as to guarantee food supplies for the inhabitants of the department. “The blockade is against the companies and the government, not against the people,” explains the social director.
Immediate repression was President Juan Manual Santos’ response concentrating primarily at those places where the picketers were interfering with the oil companies. However, ESMAD has seen there is popular community resistance. “The people, instead of backing off, have defended their territory,” asserted Alonso Campiño, spokesperson for OSCOC (Organizaciones Sociales del Centro Oriente Colombiano, in Spanish) “Social Organizations of Eastern Central Columbia.” Armed with sticks, stones, Molotov cocktails and even bows and arrows, for the moment, they have been able to keep at bay the heavily armed troops from the Riot Control Squad.

“Army soldiers stand close to us and fire their rifles in the air to threaten the people, but that’s all they can do without infringing on International Human Rights,” affirms Campiño. “That’s why we have to expose the lies General Yesid Vásquez Prada, commander of the 5th Regional Police, who has made it his policy to make statements to the media that the resisters are not the civilian population but instead are the guerrillas. They invent those things to justify bringing the army into action and justify their dirty war, their falsos positivos1, The government demands that all blockades be lifted and it promises it will sign the decree demanded by the demonstrators. However, they will not accept those terms.
President Santos had planned a visit to Arauca for Saturday, where he will sign an agreement with the go

vernor. The Social Organizations believe that a visit to a paralyzed region  would be a political setback forSantos . Consequently, they hope the authorities attempt to resolve the conflict before Santos arrives. “For now, the government has shown no disposition to dialogue,” concludes another OSCOC leader. “So, we’re expecting that in the next few days the government offensive will become more violent. But the people are organized and willing to give it all for the struggle. As we have been doing these last few days, we’re going to struggle, resist, and win.”

1 The "Falsos Positivos" scandal that exploded on October 2008 revealed how and why ranks of the Colombian Army started to kill innocent people. Lured by money prizes given by the President Uribe's policy called "Seguridad Democratica", the Colombian Army dressed the bodies in military fatigues to claim the rewards for the fight against the FARC guerrilla.