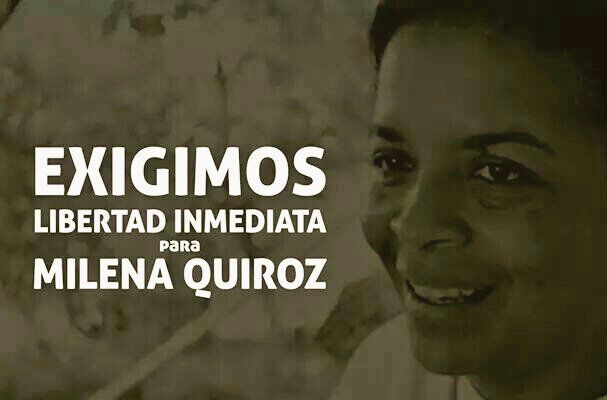 22 Mar. CI.- This morning a series of captures of social and peasant leaders began in the region of South Bolívar, one of the most impacted by the armed conflict and paramilitary presence. Milena Quiroz, of the Agrarian Summit, was detained in her house as was Isidro Alarcón, both in the municipality of Arenal. Francisco Zabaleta of the municipality of Norosí was also detained. Meanwhile they tried to detain Arisolina Rodriguez while she participated in an event about guarantees and participation, related to the peace agreements of Havana.

The People's Congress, a social and political movement that some of the detained people are part of, pointed out in an Urgent Action that since 5 in the morning the captures were initiated simultaneously: “In an irregular way, the Police and the Army captured the social leaders.” They add that the detained people are well-recognized social leaders that have been threatened and persecuted by paramilitaries.

According to what the commander of the police of the zone indicated, the 12 arrests are for supposedly pertaining to the National Liberation Army -ELN- and all of the detained people will be moved to Cartagena.

Milena Quiroz is the spokeswoman of the Agrarian Peasant Ethnic and Popular Summit, in addition to being a leader of The People’s Congress. She is part of the Commission for Dialogue of South Bolívar and Center and South Cesar -CISBCSC- and is the legal representative of the Afrodescendant Community Council Casimira Olave Arincón Amela. She is also the legal representative of the Multiactive Cooperative of Arenal -Comunarenal-, an entity that stands out for its work with two of the productive projects with the Ministry of Agriculture and the Agrarian Summit. Quiroz is also a popular communicator with the Community Radio Station of Arenal ‘La Negrita’.

Arisolina Rodríguez, who they attempted to detain in the midst of an event about guarantees and participation that was taking place in the city of Barrancabermeja, is a leader from Citizen Process for MicoHumado, like Isidro Alarcón Bohorquez.

Francisco Zabaleta, works as the legal representative of the Association of Miners of Casa de Barro, a local process that is part of CISBCSC and the People’s Congress.

Last 14th and 15th of March, the local round table of land and territories was held in Puerto Wilches of the Round Table of Dialogue of South Bolívar, Center and South Cesar. In those meetings there is presence of the national government and various national institutions. There, according to the Commission of Dialogue, Milena Quiroz presented various denouncements about the human rights situation of the inhabitants and the situation of the social-environmental and territorial conflicts that originated with the advance of mega-projects like the highway the Sun Route, the navigability of the Magdalena river, the multi use ports, the mining and energy extractivism, and palm oil agro-industrial projects.

The House Representative Victor Correa, along with the senators Iván Cepeda and Alberto Castilla, will present a report in response to the detentions. In the official document, the parliamentarians confirm that the persecution of the social movement has continued and they demand the immediate liberty of the detained people, in addition to guarantees for the spokespersons of the Commission for Dialogue of South Bolívar, Center and South Cesar.

According to the report, the responsibility of these acts falls on the National Government: “It is inconceivable that these things keep happening, in the historic moment that the country is living,” they pointed out.