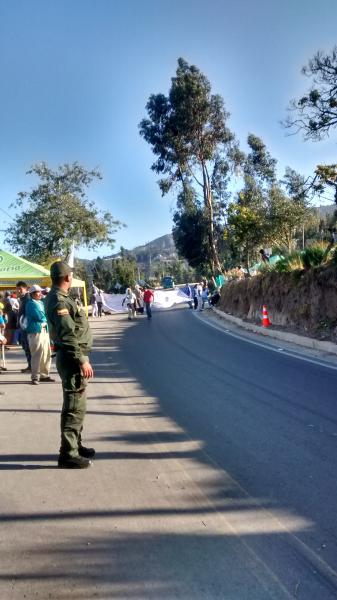 the residents of the Sugamuxi province, located in the Boyacá department, have organized a three-day protestation against multinationals and mining operations on their territory. Many militants have blocked roads in various strategic sectors, in particular in front of Argos and Holcim plants, two Swiss multinationals. The social mobilisations concerning the problematics generated by the territory exploitation are not new in the region and are part of a national fight for the environment protection, for the right to live in dignity and for the food sovereignty.

Effectively, Boyacá department is a strategic region for the Colombian food sovereignty. Traditionally composed in vast majority by farmers, the region is undergoing an economic restructuration orchestrated by the national government, restructuration that is raising worries and concerns in the population. In a market economy perspective, the Colombian State is promoting the territory non-renewable resources exploitation, such as coal and petroleum, along with the cement industry.

The climate change and its consequences, including El Niño phenomenon, have modified temperatures in the region. Nowadays, farmers are facing high temperatures during the day, and very cold ones at night. This gap between day and night is causing problems in the agricultural sector and many individuals are abandoning countryside to seek better incomes in the mineral sector. National importation policies, allowing low-price international products on the market, are adding to the climate difficulties for farmers, and put them in a position where competition is not realist. The countryside’s abandonment is not only threatening the Colombian food sovereignty, it is also causing a precarious urbanization along with problematics related to an increased poverty.

The population who chose the mineral production have become an interesting income source for multinationals. These latter prefer subcontracting small mineral producers in order to buy their production and sell it in the international markets at full price. This method allows the multinationals to avoid populations’ claims and demands, while assuring a maximal profit, by benefiting from the farmers’ lack of tools and expertise to insure their production transportation and sale abroad.  This growth of small mineral producers promotes the mineral exploitation informalization. Many of them do not possess any kind of license or legal existence, and as such, do not have to respect any environmental norms.

Beside this sociodemographic transformation, the territory’s petroleum and mineral exploitation has disastrous environmental consequences. The region residents are the first to suffer from air and water pollution. Breathing problems are the first cause of mortality in the region. Use of seismic methods for petroleum exploration weakens houses that are now presenting important fissures. Coal producers are using the subsoil and making vulnerable houses located above exploitation galleries. Aqueducts are also affected by the exploitation of the territory, and are now either dried or contaminated. 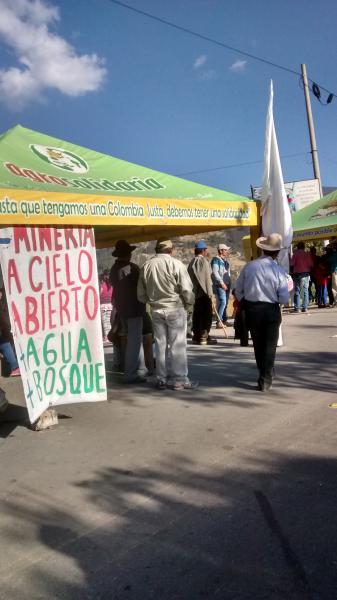 These are all reasons that motived the mobilisation of the population requiring enterprises accountability concerning their environmental impacts and their working policies, demanding in particular the employment of local resident in the multinationals plants. The situation has become problematic to a point where it is consider pleading before the Inter-American Commission of the Organization of American States if no action is taken by the local authorities to compel corporate accountability.

If lacks of accountability and concrete actions of mineral and petroleum producers are the direct cause of the region social and environmental problematics, it is in fact a whole legal and structural system who allows such situation.  Not only none of the local or national authorities are taking any actions to restrict the pollution caused by the territory exploitation, despite the local population repeated protests, but moreover, they encourage such exploitation by delivering environmental license without performing extensive researches on the impacts of exploitation.  Ricardo López Dulcey, director of Corpoboyacá – regional organisation in charge of delivering environmental licenses necessary to mineral exploration and exploitation by small producers – has himself recognized not having the necessary information to evaluate impacts of such practices. Unfortunately, once these licences are emitted, they are very difficult to suspend.  Moreover, the Colombian government is considering the mineral activity as a ‘‘locomotive’’ for the country development and as an activity of national interest. As such, it is creating short-term policies promoting the exploitative industry and refusing to diversify the region economy.
Boyacá is nowadays composed of farmers and mineral producers that are forming a community with divergent interests but suffering nonetheless from the same consequences of the territory exploitation promoted by a government at the multinationals and market economy service. This situation is driving various organisations, such as ASONALCA (Asociación Nacional Campesina José Antonio Galán Zorro), to propose a new mineral-energetic ley that would allow a new social and economic organization in which the mineral sector could cohabit with the agricultural sector.

The fight will not be easy for the Boyacá residents, who are now facing important ''development '' projects on their territory. On one side, the multinational Argos has invested for 450 millions of American dollars in its cement plant in the city of Sogamoso in order to augment of 2,3 million tons of cement its productive capacity per year. This private investment is linked to the development policies of the Santos government, in particular its project 4G, seeking the construction of highways through the whole country to facilitate the merchandise transportation. On the other side, a railway track construction project is being presenting to the National Infrastructure Agency with the goal of transporting 8 million tons of coal per year from the Boyacá department until the Carare River which would allow the industry to attain the Atlantic coast more rapidly. Once again, this project is born from a desire of augmenting the coal production and facilitating its exportation, without any concerns for the environment protection and the social consequences of such projects.

January protests are part of theses struggles but also of a larger context which should find its climax in a general strike from all Colombian social sectors that is planned for summer 2016.