By Alejandra Quintero Diaz and July Otero. The fact that in Colombia a law was passed that classifies femicide as a separate offense, is an advance in the struggle that women have been fighting for, for the right to live a life free of violence. The ex-senator Gloria Inés Ramírez from Polo Alternative Democratic Party was responsible for bringing the debate about the draft of the law. The law proposal was accompanied by strong public actions and the growing role of the women’s movement in the country. The territories, the cities, and the rural areas have been reliable witnesses to the arduous days of mobilizations, lobbying actions, campaigning for the defense and protection of the human rights of women. Countries such as México, Bolivia, Ecuador, Brazil, and Perú have also classified femicide as a separate offense.

Lately, it has become evident that violence against women has been increasing. The press announced that every three days a femicide happens in Colombia and that Colombia has one of the highest figures of women assassinated by their partner or ex-partner, which shows that it is a distinctly patriarchal state and society.

It is paradoxical that in the same moment that the femicide law is passed, many criminals, including paramilitaries are being set free. Their organizations have had a systematic policy of assassinating and raping women as part of their war strategy. On May 28 of this year, Contagio Radio published that “During the government of Uribe there was a 500% increase in forced disappearance of women.” The femicides have also happened within a war and have been systematic practices of the actors in the armed conflict carrying strong political connotations. 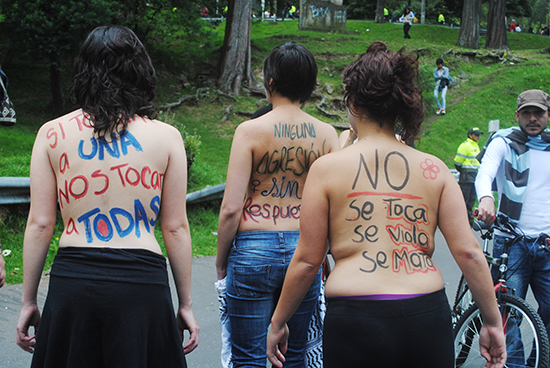 Therefore, the passing of this law marks a fundamental advance and sends a clear message to Colombian society: that we cannot allow the aggression and murder of women continue. When the Supreme Court of Justice determined that the assassination of women by their partners is a femicide, it also stated that these murders are not simple crimes of passion about “absurd” issues, they are about power relations where men believe that women are their property, so much so that they kill them when women refuse to be under male subjugation. This is the important point and this definition should help us stop saying that femicides are products of passion and jealousy.

In all of Latin America, #NiUnaMenos

It is the duty of the whole society, and especially of the women’s movement, to permanently exercise vigilance and a platform to this law, to demand an end to the lack of enforcement, an end to the measures of control and registration that prevent keeping statistics in real time, an end to the negligence by the investigation entities and the police, and an end to revictimization.

For all women, for us, and for a truly free society, we demand peace, a dignified life, and justice for all women. For this reason we join the outcries of voices in Argentina and in Latin America saying: For the Right to Exist, Think, and Decide, #NiUnaMenos. For all of the murdered women, not one minute of silence, a lifetime of struggle.