“United to Recover our Memory
for a Colombia that does not Forget." 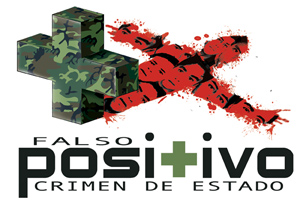 National and international tribute to the victims of extrajudicial killings carried out by the Colombian armed forces. Known as “false positives”, civilians, normally peasant farmers or young people from the lowest income sectors of society, are assassinated and later presented as guerilla killed in combat in order to show them as deaths in the so-called “war against terrorism”. This in turn allows the Colombian military to gain rewards or inflate the statistics of the war, incited by official orders. This odious practice was officially recognised in September 2008 when 19 young people were disappeared in Soacha, a poor neighbourhood of Bogotá, and then later found in mass graves in rural areas more than 500km away.

This practice is not a new thing, organisations such as the Coordination Colombia-Europe-United States and the Colombian Platform for Human Rights, has reported more than 1400 of these cases since 2002 when the the democratic security policy of President Uribe was initiated. The “false positives”, recognised in International Law as extrajudicial killings have been part of Colombian reality for more than twenty years.

Colombia lives a bloody war, In the last 11 years there has been 3000 mass graves, more than 30000 disappeared, 4.2 million displaced and 23000 kidnapped, figures which shed light on the victims of this conflict.

The Network of Solidarity and Friendship (REDHER) stands in solidarity with the victims of paramilitarism, para politica and State crimes.

We demand from the Colombian government:

* The immediate end to the persecution and imprisonment of the members of social organisations, unions, human rights defenders, journalists, students, peasant farmers, indigenous and those who democratically oppose the government.

* Truth, justice and reparation and no more repetition of crimes against human dignity.

* We call on the national and international community to echo this demand and contribute to the construction of a true democratic society en Colombia, supported by peace, social justice and the comprehensive respect for human rights.

Truth, justice and reparation for the victims of state terrorism in Colombia

No more crimes against humanity!

- The National Movement of Victims of State Crimes