Firms involved in Colombia's mines must be more transparent about the payments they make and the way they are governed.

In Colombia, a complex web of royalties, tax and other payments are made by companies involved in the extractives industry to various government ministries and departments, local authorities and quasi state bodies. Very little information about these financial flows reaches either the communities affected by mining activity or the wider public domain.

Currently, 80% of mining royalties are supposed to return to the producing region to be invested in development projects. But citizens in Colombia don't know whether that money is arriving. Neither do they know whether the government has negotiated a good deal on their behalf.

When I met with Colombian government officials earlier this year, they also felt they didn't have the full picture. That made it hard for them to assess the benefits of any mining investment.

This week, the fourth conference of state parties to the UN Convention Against Corruption is taking place in Marrakech. North Africa would seem an appropriate location for this meeting, considering the tumultuous changes that have gone on there over the past year. Citizens across the region have demanded greater transparency from their governments and a stronger say in how they are governed. 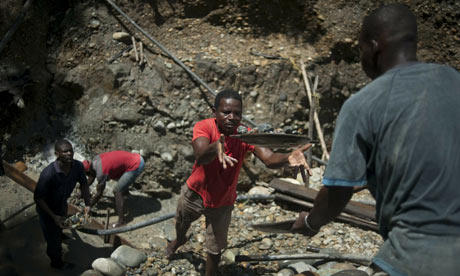 Ultimately, states become more accountable, more transparent and better governed as a result of the demands of their citizens, and of partnerships between state and civil society.

On Tuesday, the European Commission proposed Europe-wide legislation to address the problem of access to information to assess the benefits of contracts. It requires extractive companies listed in Europe to publish details of the payments they make to national governments. The legislation has been inspired by the US Dodd-Frank Act, which requires the same for companies listed on American stock exchanges.

Mining in Angostura, Colombia. Communities receive scant information about what happens to the money made by extractive firms.
Photograph: Eitan Abramovich/AFP

At first sight, this technical financial data dealing with contracts, taxes and royalties might seem far removed from the realities of communities living in poverty in countries where huge oil, gas and mineral wealth is extracted by international companies. However, as I travelled across Colombia meeting community leaders, MPs, civil servants, business community representatives and church leaders, it became increasingly clear that such information is eagerly sought.

In most developed countries, issues of such critical national importance would be a matter for extensive national debate. In Colombia, this has not been possible. As Professor Guillermo Rudas-Lleras, professor in environmental economics at the Javeriana, National and Externado universities of Colombia, says: "Annual surface licence fees are payable to the Colombian government … no one knows whether it is paid, who receives it and how it is spent. It could constitute one-third of the environmental budget. It is likely to be 10 times more than what the mining authorities claim to be receiving at the moment. Our mining minister talks about a low budget, but from my own studies I know there is a lot of money coming from licensing."

It is clear that, if information like this is made public as a result of legislation in the US, Europe and elsewhere, academics such as Guillermo, civil society organisations, church leaders and others will make good use of it. It will play a key role in releasing resources for development, improving transparency and engaging citizens with their governments. Evidence from other countries has shown that where details of budgets and projected expenditure is published, the money is much more likely to reach its intended destination and support development.

Increased transparency can even create a more stable environment for business, and reduce conflicts, which have often been caused by mismanagement or perceived mismanagement of mining companies.

However, for this to be the case, the information needs to be broken down at local level to see the contribution of companies to the different communities in which they are operating. That is why it is important that the EU proposals maintain a clear commitment on reporting at both project and country level, and that they cover non-listed as well as listed companies. It is also important that these proposals remain ambitious, and seek ways of including other information on profits, sales, production levels and reserves that would enable countries to assess whether they are receiving a good deal.

The proposed EU legislation on the extractive industries, the existing legislation in the US, and the UN Convention Against Corruption are all key tools that make information available or set moral standards for states, enabling civil society to hold their governments to account. Together, they demand more progress in transparency and accountability, and in the fight against poverty and corruption.

• Paul Cook is Advocacy Director, for Tearfund, which released a report called Unearth the truth: making extractive industries work for all on Tuesday