On April 26, 2014, hundreds of residents from the department Casanare gathered in Trinidad, Casanare for a public hearing on the on the environmental and human rights impacts of oil exploitation. Senator Iván Cepeda presided over the hearing, and a number of government officials attended. They listened to the testimonies of community members, who presented instances of human rights violations and environmental damage due to petroleum extraction by multinational companies like Talisman Energy.

These hearings come after a highly publicized environmental disaster in the region, in which 20,000  animals died due to a severe drought affecting over 250,000 hectares1.  The striking images of animals laying dead alongside dried up rivers circulated beyond the usual social movement and environmentalist publications, reaching Colombia's mainstream news sources such as El Tiempo, La Semana, El Heraldo, El Espectador, and El Pais.

This environmental disaster was not random; the drought is the result of more than two decades of seismic exploration and petroleum exploitation, processes which consume large quantities of water.  Seismic exploration is used to verify if there are subterranean oil deposits by placing explosives underground at different extremities.  This method has caused damage to the region because the explosives disturb the flow and functioning of underground water systems, which feed into rivers, wetlands, streams, and estuaries.  The other source of the drought is petroleum exploitation. As part of this process, oil companies use large amounts of water--15 barrels for every barrel of petroleum extracted2. 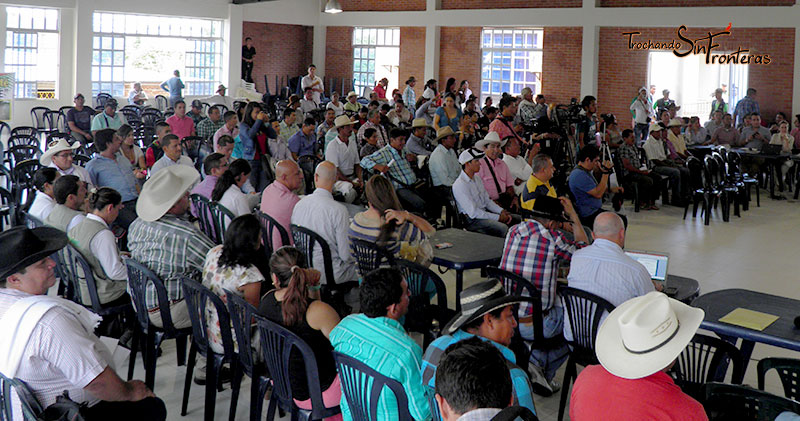 It is important to note that, while Colombia only needs 300,000 barrels of Petroleum for its own energy use, every day over 1,000,000 barrels are extracted from Arauca, Casanare, and Meta. This extreme over-exploitation favors multinational companies that exploit Colombia’s oil reserves for profit, rather than benefiting those in the region, or strengthening Colombia’s energy sovereignty.

The dominant petroleum multinational present in Casanare  was historically British Petroleum (BP), which started exploration and exploitation in Colombia in 1986. BP had a several negative effects on the region, contributing to displacement of peasants, environmental destruction, the militarization of the region, and an increased paramilitary presence3. However in 2010, BP was forced to sell the majority of its international shares after causing a catastrophic oil spill in the gulf of Mexico. In August 2010, BP sold its Colombian operations to Equion Energía, which is comprised of Ecopetrol and Talisman energy (51% and 49% respectively) for $1.9 billion dollars.

Talisman has continued the over-exploitation of Casanare’s petroleum deposits started by BP, and has also been implicated in a variety of human rights violations, most notably the stigmatization and criminalization of protest.  Since 2011, the campesina, indigenous, urban, and social organizations and communities in Casanare have been standing up in the defense of their territory and for the 60,000 hectares that are controlled by multinationals in the region (a large majority by Talisman)4.  There have been protests for the right to potable water, environmental protection, an end to seismic exploration, and better conditions for oil workers, among others. In December 2013, in the municipality of Tauramena,  a popular vote took place on whether there should be seismic exploration, exploratory drilling, production and transport of oil in various towns within Tauramena5. The communities voted overwhelmingly: No.

Amongst this surge of community activism and mobilization in opposition to petroleum exploitation, oil companies and the Colombian government have responded through criminalization and the stigmatization of protest.  Activists have been detained for their participation in the mobilizations, and community members and leaders have been the targets of constant threats and violence.  Since 2010, when Talisman Energy arrived in the region, three vocal presidents of community organizing committees “Juntas of Communal Action” have been assassinated6. In 2012, the recently elected president of the “Asociación de juntas de acción comunal del Corregimiento El Morro – ASOJUNTAS” Javier Silva was publicly threatened by members of Equion Energy and shortly after disappeared. In the same year, Cenin Cruz,  another leader from ASOJUNTAS, also disappeared7.

Most recently, community leader Faustino Acevedo was assassinated on April 6, 2014 by an unidentified youth8.  Acevedo, like Javier Silva, had just been elected president of ASOJUNTAS and had been active in voicing his opposition to multinational petroleum projects. He had also advocated for the rights of workers, often working in collaboration with the “Union Sindicato Obrero de la Industria del Petróleo - USO”, the national oil workers union in Colombia. His public activism made him the target of constant threats and intimidation.  Despite his attempts to denounce these threats to government officials in 2012, the Colombian government failed to investigate. Before his death Acevedo was involved in the process of signing an agreement between the community of El Morro and Equion dealing with the El Morro Oilfields9.

Talisman Energy also operates in countries like the Sudan, Algeria, and Iraq, where it has been publicly denounced for facilitating war crimes, human rights violations, and genocide in order to extract petroleum and advance their capital interests10. Given this, and Casanare’s already fragile environmental and human rights situation, its continued presence in the region is deeply troubling.