Canacol Energy Ltd. is a Canadian gas and exploration company that was founded by CEO Charle Gamba in 2008 and is traded on the Toronto Stock Exchange. The company’s head office is located in Alberta, Canada however its extractive projects and operations are carried out in resource-rich Colombia. On their corporate website, Canacol outlines their broad mandate and highlights their commitment to corporate responsibility.1

The company claims to:

Additionally, Canacol underlines that they have signed the UN Global Compact on Human Rights and Voluntary Principles an agreement asking that private sector signatories use best practices by promoting human rights and allowing for the UN to engage with them on a critical platform. Despite these promising claims, Canacol does not uphold its UN obligations, nor does it fulfill its mandate to social and environmental responsibility. Canacol continues to prioritize its own profit-seeking goals and ignores the rights of the Colombian people. The recent history of Canacol’s activities in Colombia and the emerging incidences of violence in related regions requires careful attention from the international community and the Canadian and Colombian governments.

RECENT HISTORY: A Timeline of Events

In May 2017 Canacol received licensing from the Colombian government to begin exploration in the Departments of Cesar and Santander for its prospective hydraulic fracking projects in 2019-20 and 2020-21 respectively. 2

In September 2018 Canacol Energy Ltd announced the sale of the majority of its assets with the aim of clearing off their conventional oil-drilling projects in order to focus on oil and natural gas production through hydraulic fracking.3

From the sale of their oil assets, Canacol kept two key portions of land spanning the Departments of Cesar (VMM-3) and Santander (VMM-2). They have partnered with ConocoPhillips (a US extractive company) to move their plans for hydraulic fracking production forward in these two exploration blocks. 4  Oil production can legally begin once they receive the necessary permits from Colombian environmental authorities which requires multinational corporations (MNCs) to consult with and inform surrounding communities about the environmental risks associated with fracking projects. 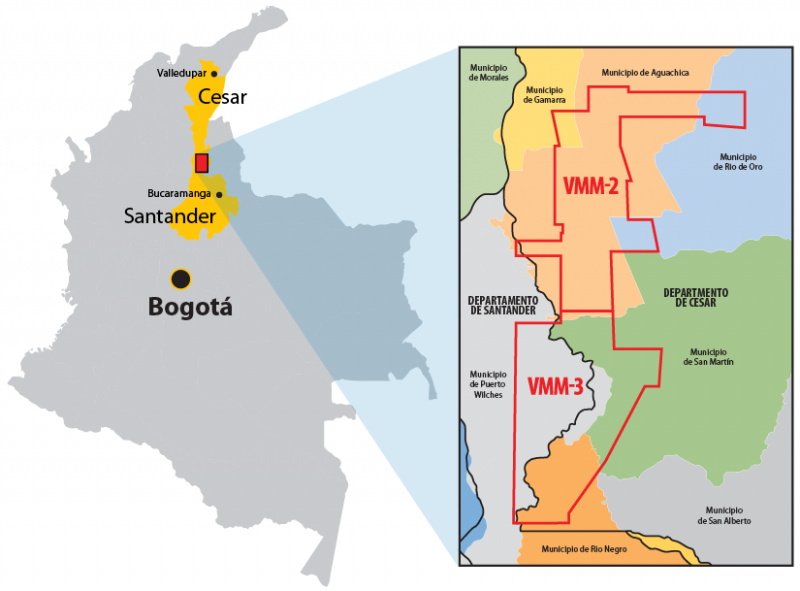 Meanwhile, ConocoPhillips has been holding townhall meetings in affected communities. Recordings of the meetings show that the representatives for Canacol and ConocoPhillips were not transparent about the environmental risks associated with their project.  Local organizations in San Martín, led by the Corporation in Defense of Water, Territory and Ecosystems (CORDATEC), have been resisting this project, and have successfully mobilized community opposition.5

In November 2018, Colombian environmental authorities (ANLA) rejected Canacol and ConocoPhillips’ request for permits to begin their hydraulic fracking pilot project. The companies’ consultation process was deemed insufficient as it lacked transparency and was met with strong opposition from community members.6

VIOLENCE: Activists continue to be targeted in Colombia

On January 23, 2019 José Orlando Reina, a social leader and environmentalist from CORDATEC was shot in downtown San Martín he survived his gunshot wounds and is currently being treated at a nearby hospital in Aguachica.9 CORDATEC reports that social leaders related to the organization have been targets of violence since they have been actively building an opposition to Canacol and ConocoPhillips extractive projects.

Talk is not enough. It is recommended that:

Authored by: Sandra Teresa Covone for QPIRG and PASC