We denounce the detention of Julián Andrés Gil Reyes on June 6th 2018. We invite you to send your letters online to the Colombian authorities. 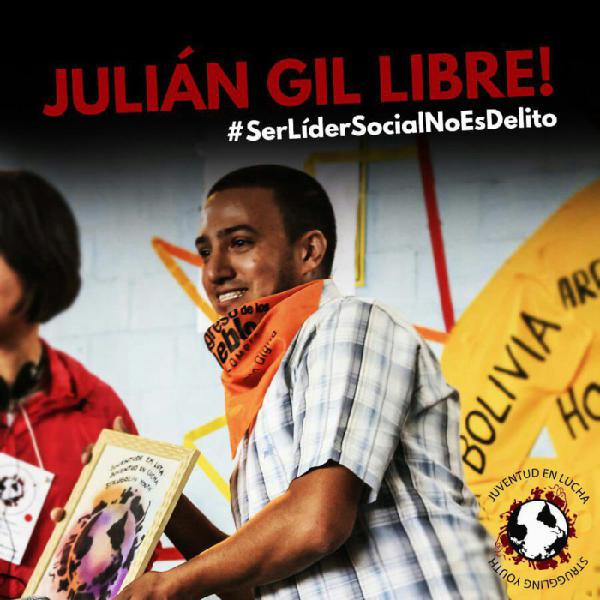 La Red de Hermandad y Solidaridad con Colombia (RedHer), composed of various internationalist solidarity collectives from Europe, Canada and Latin America, has been working for over twenty years with Colombian social organizations including the Peoples Congress. We know Julian because he has been a dedicated organizer with the International Congress Commission. He is also the technical secretary of the Peoples Congress. Since we have worked closely with him for many years, we are able to defend, with certainty, his reputation, honesty and integrity. He has been an excellent companion for us both professionally and personally.

On June 8th, the judge declined the request to have him put in preventive detention, thus assigning him to prison until his trial, which could possibly take as long as two years. Julian is accused of belonging to the ELN guerrillas. However, this charge is based solely on the  testimony of a person who obtained legal and economic benefits in exchange for this statement. Pre-trial detention will deprive Julian of
his freedom for several months, until he is likely cleared for lack of evidence.

RedHer's member organizations state that they are entitled to all the guarantees provided by the Colombian legal and constitutional system so that all rights are fully respected.

We also wish to express our solidarity and support to Julián and his family.

Far from being an isolated case, this unfair detention takes place at a time where all members of the social movements within Colombia are potential victim of criminalization and  systematic persecution. Unfortunately, today we must add the name of Julian to the list of the 13 leaders of South Bolivar last year, adding to the names of the 33 leaders of the south- west of the country, (if we only quote the more recent cases by excluding  other regions such as Casanare or Cesar. In addition, on June 14th, a public threat signed by the paramilitary group Autodefense Gaitainiste of Colombia was circulated and made against approximately twenty active members of the Colombian social movement including the spokesperson of the People's Congress and member of the executive committee of the union of the CUT Edgar Mojica. We will remain vigilant about Julian's case and ready to mobilize for his upcoming release.

We hereby express our deep concern for the persecution suffered by social leaders especially belonging to the Peoples Congress, through actions and omissions of the Office of the Attorney General of the Nation.

We observe the systematic character of the attacks against leaders and social leaders and the increase of murders, judicializations, threats and other violations against them. It is contradictory that in the context of implementation of peace agreements and negotiation with the insurgency of the ELN, the Colombian State does not protect the work of people who dedicate their lives to building peace from the territories and encourage the participation of the society.

As reported by the Ombudsman's Office and the High Commissioner for Human Rights in their recent reports, the figures of assassinated leaders continue to increase. According to a report signed by the Agrarian, Peasant, Ethnic and Popular Summit, "in the period between January 1, 2016 and May 14, 2018, nationally, 385 social leaders and human rights defenders They  have been killed. 2016 total 116: 2017 total 191. 2018 total 78. "

Likewise, judicialization to the social movement is sharpened: in March 2017, 13 recognized social leaders were arrested in the South of Bolívar, and in April 2018 approximately 33 social leaders from different municipalities of the Colombian Southwest.

From April 20 to 23, 2018, 30 people were arrested in 5 different departments, among which were recognized territorial leaders, who were charged with the crimes of Rebellion, concert to commit a crime, drug trafficking, among others, pointing out the belonging of these people to the ELN. Among the people deprived of their liberty, there are two PCN leaders, Sara Quiñonez and Tulia Valencia, victims of forced displacement in Tumaco; Alejandra Dizú, indigenous vice-governor of a Cabildo of the Cauca Valley and Luis Risueño, indigenous leader of Nariño. As well, the arrest made on June 6, 2018 against Julián Andrés Gil Reyes, member of the International Commission and Technical Secretary of the Peoples Congress, which  demonstrates once again the systematic nature of this criminalization strategy and prosecuted towards the less favored social sectors. The judge of guarantee issued on Friday, June 8,
assurance measures as required by the Prosecutor's Office, who points out that he belongs to the National Liberation Army presenting charges of reception, transport and trafficking of explosives and carrying weapons, based exclusively on the testimony of a person who receives legal benefits for his declaration. That situation deprives Julián Andrés Gil Reyes of his freedom until the intramural insurance measures are revoked or his innocence is proven in court. That is, he will have to endure the deprivation of his freedom without any material evidence being brought to the case.

In the report presented by the Peoples Congress in the framework of the Universal Periodic Review of May 20181, it presented the following concerns about these practices, which today, far from being reduced, are exacerbated.

Peasant communities and social leaders continue to be prosecuted and imprisoned, based exclusively on the statements of alleged deserters of the rebel forces, who are used as informants of the public force and receive benefits from the national government. The suitability of these witnesses is highly questionable, because in addition to responding to
the control and pressure of the authorities, they receive economic compensation for their testimonies and therefore these cases show weaknesses and inconsistencies in the probative information. Despite this, people prosecuted under this "modality" of witnesses are usually affected by intramural insurance measures and judicial proceedings are characterized by delaying the terms, prolonging the deprivation of liberty in detention centres. Due to the seriousness of the charges, their cases are brought to the attention of specialized justice, in which the procedural times are extended.


We also see a tendency towards parallel trials, in violation of the principle of presumption of innocence and judicial independence. The last mass arrests in the cities and the consequent judicial proceedings for acts of various kinds have been the subject of widespread media coverage, in which statements of high-level officials of the police, the prosecution and the national government are mixed, applauding the results and publicly requesting intramural insurance measures.  The detainees are presented as guilty before the media, and incriminated
through evidence leaked to the press by the Prosecutor and the police, even before they are known and disputed by the defense in the courts. In some cases with alleged evidence that never appeared in the proceedings.


This is the case of the leaders of the South of Bolívar, within which on March 22, 2017, the prosecutor María Bernarda Puentes, who today is being held for links with the paramilitaries, declared in a hearing that "The Prosecutor's Office considers that this measure is necessary and proportional (intramural) because Mrs. Milena moves masses and is demonstrated because she is a community and social leader. There are testimonies that say that she organizes marches that would have a real purpose of supporting the illegal organization of the ELN2, "The
Prosecutor, as noted, has been detained in an anti-corruption operation in July 2017 for allegedly granting judicial benefits to structures paramilitaries and organized crime.3
We share the complaints against the investigations against the judges that grant freedom instead of imposing an insurance measure. Media pressure and judicial persecution have been exercised against judges who, against the prosecutor's requests, do not impose an assurance measure or opt for a non-custodial measure4.
The process of criminalization of social leadership is reinforced by the irresponsible media claims - without judicial basis - that show the undue practices of the Prosecutor's Office and the complacency on the part of the media, with the sectors interested in eliminating, judicially and physically , popular opposition and social movements.5


For these reasons we request your most prompt intervention:

For the immediate freedom of Julian Andres Gil Reyes and the prompt resolution of the other detainees
For justice in Colombia to investigate the aggressions and crimes committed against human rights defenders, leaders and social leaders
Demand that the Colombian State cease persecution and criminalization, guaranteeing freedom first and foremost.
Require the authorities to offer procedural guarantees to the accused, but above all, respect the right to protest, to the organization and to mobilize in the country.
Sincerely,

1 Varios países emitieron recomendaciones en ese sentido, por ejemplo: 6.55Ensure that human rights defenders are protected while carrying out their important work and the judicial authorities conduct full and impartial criminal investigations so that perpetrators are held accountable (Austria) 6.798 Advance in the recognition and protection of human rights defenders, avoiding their criminalization and fighting against the impunity (Spain);