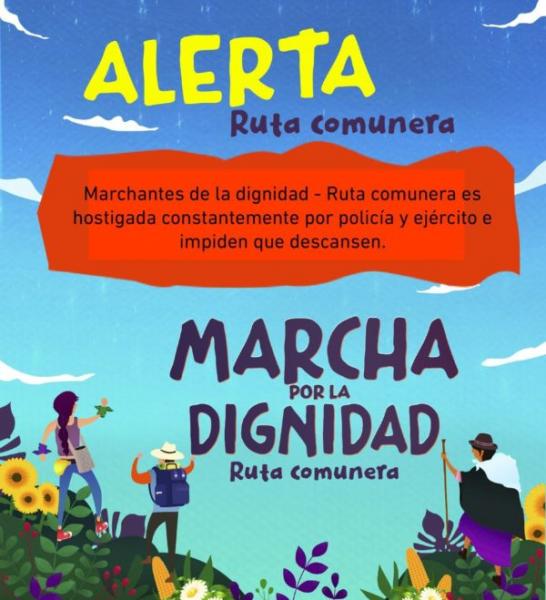 We denounce before the national and international community the harassment by the National Police of Colombia towards the March for the Dignity of the Peoples, in the Barrancabermeja-Bucaramanga road, where the agent identified with the number 441014 has stopped the bus that accompanies the march in four opportunities. We make this call to the Attorney General's Office because this behavior is evidence of harassment towards the present mobilization which can become a threat to the freedom and integrity of the communities and movements that are mobilizing towards Bogotá today, July 13, 2020, as well as the violation of their right to social protest.

The social and political movement People's Congress, the Corporation Human Rights Committee Jesus Maria Valle Jaramillo, the process City in Movement, the collective Blue Shields, the Central Unitary Workers - CUT, the Labor Union - USO, the Network of Brotherhood and Solidarity with Colombia - RedHer, the National Agrarian Coordinator - CNA alert the control and monitoring entities on human rights to the possible violation of them in the framework of the March for the Dignity of the Peoples.

On July 13, 2020, the aforementioned processes and social movements formed the March for the Dignity of the Peoples from the city of Barrancabermeja to Bogotá, in order to make visible the situation of state abandonment that different communities in the country are experiencing, with consequences such as the systematic murder of social and environmental leaders, the lack of guarantees for a dignified life, the arbitrary eviction of communities in the context of the pandemic, the precariousness of the health system in the regions, and other problems that affect human dignity, fundamental rights and the various guarantees of a dignified life that the inhabitants of Colombian territory must have.

1. The March for the Dignity of the Peoples begins its journey on July 13, 2020 from the city of Barrancabermeja to the city of Bogotá with the necessary biosecurity protocols to guarantee the containment of the virus and the safety of the demonstrators.

2. That same day, the National Police agent identified with the number 441014 stops the bus in which the marchers are mobilized on four different occasions.

3. In each of these arrests, the appropriate permits are requested by the Ministry of Transport, photographs are taken of the demonstrators and their identity documents are requested.

4. During the last of these detentions at 3:10 pm, the agent identified with number 389609 issues a summons to the bus on which the demonstration is being held, in order to prevent the march from continuing its journey and to seek its return to the initial point of the march, under the argument that there is no protection under Decree 749 of 2020, since it is not "in force", thus committing an abuse of authority. This appearance is given under the order of the agent identified with the number 367370.

We hold the Presidency of the Republic of Colombia in Cabeza de Iván Duque, Minister of Defense Carlos Holmes Trujillo, Colonel Carlos Julio Cabrera Sánchez, Commander of the Santander Police Department and Colonel Gustavo Adolfo Martínez Bustos, Commander of the Magdalena Medio Police Department, responsible for any action that puts the lives of the demonstrators at risk, as a result of the events described below.

We ask for the solidarity of national and international organisations defending human rights and international humanitarian law to help disseminate this action and to address the respective communications to the competent authorities.

RICARDO ARIAS MACIAS- director of the Human Rights Program of the Ministry of the Interior Calle 12B No. 8-38, Bogotá, D.C. servicioalciudadano@mininterior.go.co