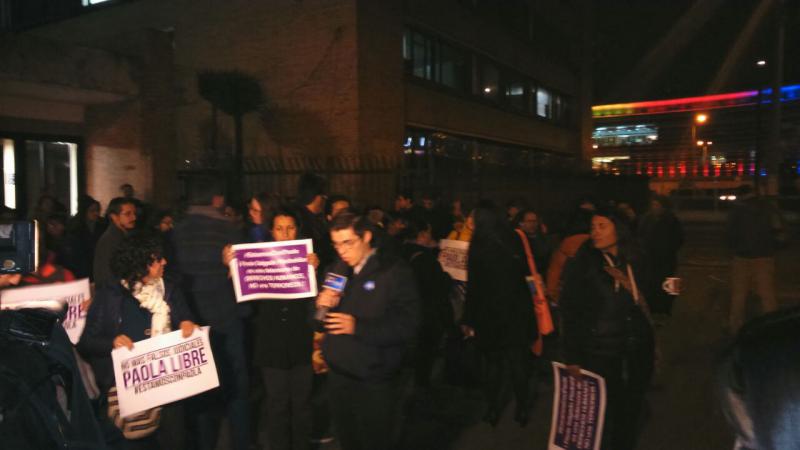 As the social, student, labor, environmental, human rights organizations signed below, we denounce to national and international public opinion the following incidents that constitute a grave human rights violation. Principally violating the rights of association, protest, due process, expression, and the right to defend human rights in Colombia.

Today, July 8, 2015, 15 people were detained in the city of Bogotá simultaneously in operations conducted by the District Attorney of the Nation, along with the National Police. The detained were accused of being responsible for the attacks that occured last week in Bogotá.

In response to these arrests, there were declarations from the President of the Republic, authorities from Bogotá, and from the District Attorney of the Nation, all focused on confirming the responsibility of the detained people for the incidents without guaranteeing them the presumption of innocence.

Regarding these incidents, we denounce that; the majority of the detained and accused are well known student leaders, peasants, journalists, public functionaries in the city government, human rights defenders, that have been publicly fighting for the defense of public education, the rights of peasants, and the construction of peace. Eleven of the detained people are part of organizations that make up Congreso de los Pueblos (The People’s Congress).

The arrests carried out today are aimed at persecuting and criminalizing social protest and the freedom of expression in Colombia, and to create obstacles to the defense of human rights and the search for a stable and lasting peace.

We are worried about the multiple cases of legal false positives that have happened and continue to happen in this last year and have been generating stigmatizations and risks to the members of the social movement in Colombia.

Below, we present the profiles of our friends and fellow activists, distinguished human beings who, through their hard work and commitment have contributed greatly to the creation of our social and political movement, who have faith in peace and social justice and who represent structural changes for the country.

Woman, feminist, and young lawyer from the Universidad Nacional de Colombia, committed to the defense of human rights and woman’s rights. Within the feminist movement, her work is well known for her lawsuit and investigation about violations of political and civil rights, violations against the DIH and violence against women. She has taken part in the Round Table for Women’s Life and Health, the National Network of Women, the Meeting of Women of the Congress of the Towns. She is often consulted for her professional opinion by different media outlets, and she has participated in different television programs, academic events, seminars and forums, among other spaces. Her commitment and abilities in the defense of women’s rights have led her to become coordinator of the District Office of Health of Bogota—Suba Hospital II Level ESE. We know Paola as a friend and an animal lover with a commitment to life and dreams.

27 years old, Sergio is the Social Communicator of the Cooperative University of Colombia and masters candidate in Social Sciences. A National Teacher’s College graduate, he has become a journalist and communicator in the Communications Agency of the People at Colombia Informa. Sergio is currently working as manager of residents in the Secretary of Education as part of the Education for the People and for Coexistence project in the town of Ciudad Bolivar. Sergio also stands out for his leadership in the Objection of Conscience Organization in Bogotá.

Lorena Romo Muñoz, 23, is a political scientist from the National University of Colombia and is enrolled in the Universidad Externado de Colombia, and will begin to take courses her major in Public Politics in August. She has been an activist in the student movement since the year 2010. She was part of the direction of the National Student Identity Organization in Bogotá and since then has become a member of the Academic Commission of the National Student Round Table (MANE). Since 2015, Lorena has worked as Social Manager of the District from the Office of Education, where she is an invaluable asset.

Lorena is a neighborhood leader in the towns of Teusaquillo and Chapinero. Through her social activism she has participated in different spaces that have promoted the construction of peace through civil society, such as Frente Amplio for Peace and Protest for Peace. Lorena has driven the development of the educational pre-congress for peace, which took place in Cali in the year 2014.

Heiler Lamprea, 25, has been a Representative to the Superior University Council of the National Teacher’s University since 2013. He is a student in the last semester of his Philosophy degree. As part of his social activism, he has stood out as a leader of the Frente Amplio for Education, Peace, and Human Rights. He has been part of the National Student Identity Trial and the Congress of Towns since the year 2010.

Heiler has developed work accompanying the communal neighborhoods in high schools in the town of Suba, promoting political participation in communities, the defense and promotion of rights, the construction of peace, drug prevention, and promoting access to public, free, quality higher education.

Through his role as Student Representative, Heiler has promoted the institutional space of UPN Dialogues, which aims to discuss the role the university should play in the construction of peace.

Víctor Orlando Ariza, 21, has been part of social movements that defend public education in Colombia since he was a high school student. He continued to propel the high school student organization forward until he enrolled in University.

Daniel Hernández is 23 years old, and has been part of the National Student Identity Organization and the Congress of Towns since 2010. He is a student in his seventh semester of Philosophy at the Universidad Pedagógica de Colombia.

He works in the communal neighborhoods of Suba’s high schools, promoting student organization in order to defend public education. His social activism is realized through a focus on public education and through the teachings of sociologist Orlando Fals Borda, from the Participatory Action Investigation.

34 years old, Luis is an agricultural engineer at the National University. Currently he is the representative of the Corporación Arando where he stands out as a leader in neighborhood and rural organizations in Usme and Tunjuelito. He is a member of the National Agricultural Coordinator (CNA) and the Congress of Towns. He is also part of the Environmental Network Bakata and leader of the Association of Eco-Agricultural Families.

As a student, he was a representative on the Board of the Faculty of Agriculture at the Universidad Nacional and received threats for his activities. Today he is a Masters candidate in Rural Development at Pontificia Universidad Javeriana.

23 years old, Andres is a philosopher from the Universidad Nacional de Colombia. He was a student activist, as part of the organization of the National Student Round Table (MANE). He currently works at the Peace and Reconciliation Foundation. Currently he is part of the Congress of the Towns as a student leader.

Gerson is 27 years old and is a student in his final semester of Community Education with a focus in Human Rights from the Universidad Pedagógica Nacional. He has taught youth in schools in Ciudad Bolívar and Tunjuelito. Currently he is treasurer of the organization TEJUNTAS, community youth leader in Ciudad Bolívar and Usme, and defender of human rights in the youth sector in search of productive alternatives for young people.

Liceth is a 21 year-old student at Universidad Pedagógica in her fourth semester, studying social studies. She is a part of Identidad Estudiantil and MANE and is an active member of the Congress of the Towns. In 2010 she worked as defender of women’s rights and currently is dedicated to the creation of student councils at UPN.

19 years old, Jhon is a student at the Universidad Pedagógica Nacional studying Performing Arts, and works defending gender and women’s rights. Jhon works to promote respect for women and women’s bodies as a site of peacemaking. He is developing an academic proposal that aims to link the arts as a tool for the construction of peace. He is part of the Organization for Student Identity.

Felix is a 25 year-old university student studying philosophy at the Universidad Pedagógica Nacional. He was an active member of the Acción Maestra collective which did community work with children through art and sports, with the intention of keeping the youth population out of conflict and the possibly of becoming associated with drugs and crime. Felix was part of the project Lectores Ciudadanos de la Alcadía Mayor de Bogotá to promote reading in vulnerable families and communities. Currently he works as a teacher in high schools in Cundinamarca to prepare students for the Saber exams, with the ASED Educational Corporation. He has been a defender of human rights in the country, reclaiming education as a fundamental right for the transformations the country needs. He is a member of the Congreso de los Pueblos.

We demand the freedom of the people deprived of their liberty with the guarantee of a due process and the recognition of the legitimacy and legality of their actions.

We call the General Prosecutors of the nation to act in line with the principal of judicial independence by making a reasonable and technical assessment of the alleged evidence that has been collected, as they were in public and work-related activities to testify and provide justification.

We demand guarantees to political participation, the exercise of social protest and the freedom of expression in Colombia, and to detain all the mechanisms that obstruct the defense of human rights.