ESMAD (riot police) in Huila, Colombia began the forced removal of the fisher-people, campesinos, miners, day laborers and others who have been blocking the diverting of the Magdalena River for the Quimbo Dam early Tuesday morning. The diverting of the river was being blocked by a peaceful occupation of the area known as Domingo Arias. The ESMAD used tear gas, pepper spray and brutal force to corral the people protecting the Yuma/Guacahayo/Magdalena River. At least six people have been injured, including Asoquimbo member Luis Carlos Trujillo who lost an eye.

Since noon Monday, ESMAD blocked the entrance to the Paso del Colegio Bridge to all traffic except the Quimbo´s constant traffic of workers, engineers and machinery. The President of Asoquimbo, Elsa Ardila, members of regional organizations, Local, National, International Press as well as Observers from the International Observatory for Peace were not permitted to enter, effectively creating a black out of what the State was doing in the area. Only after some journalists did an interview on the air stating they were being kept out and blasting the message from a car, media with documentation from the Ministry of Communication were allowed to enter. Meanwhile, independent journalist and human rights observers were denied entry. 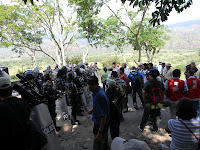 During the ordeal elders, children and expecting mothers were not spared from the baton strikes, punches, kicks and shoves with shields of the ESMAD. One child was removed from their parents and later was returned only after. The people, who were forcibly removed, were taken out in six Chivas (local rural buses) that rushed past those outside and the groups of people were not permitted to interact Those removed were taken back to the towns closest to their community. In the last two Chivas, the fisherman of Hobo forced the drivers to stop and jumped out to unite with those who had been blocked out.

The people occupying the banks of the river were within 30 meters of the shore, which is an area that is legally permitted to the inhabitants of the country as a public area to inhabit freely. When the ESMAD came at everyone with violence, the Defenders of the River held hands and stood in the water. Tear gas and violence were then used to force people out. The Mayor of the Municipality of Paicol, Norberto Palomino Ríos, supporting the National Government and Emgesa, issued the order for the forced removal of about 200 affected people in the area. 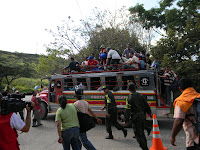 While the local autonomous environmental organization CAM pronounced in a meeting with the Minister of Interior last week they would be present for the forced removal, no one ever showed. Both the Vice Ministers of Environmental and the Interior refused to give any statements to Miller Dussan of Asoquimbo, during the removal while being blocked from entering the site. Meanwhile the Ombudsman from the Paicol Mayor’s Office road in the boats used by Emgesa workers and watched the removal from the construction site across the river.

Currently the affected people of the Quimbo Dam are healing themselves to move forward with the necessary actions to Defend the Yuma-Guacahayo-Magdalena River.

Please Support in the Ways mentioned below.
Author:
Upside Down World