Write on line to denounce the arrests 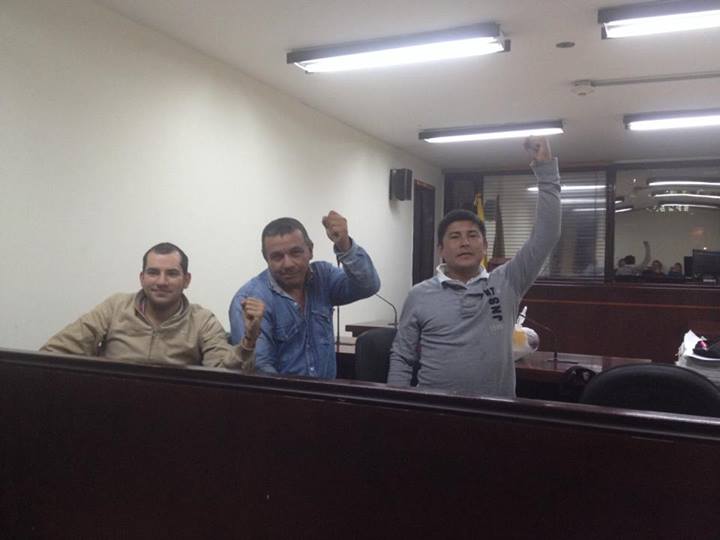 The UNION SINDICAL OBRERA DE LA INDUSTRIA DEL PETROLEO (USO) denounces the latest series of arrests that occurred on December 4, 2013, those of CAMPO ELIAS ORTIZ, JOSE DILIO NARANJO, and HECTOR SANCHEZ, who were workers and union leaders in intermediary companies contracted by PACIFIC RUBIALES in the Department of Meta. These events follow the arrest of DARIO CARDENAS, vice president of USO’s Meta Division several weeks ago.

The promising oil fields of Campo Rubiales, in Puerto Gaitan, Meta have become a new oil enclave, with over 10,000 employees who work in humiliating circumstances with no regard for Colombian law. In this context, our union has repeatedly demanded decent working conditions and respect for workers’ constitutional rights. The response we have received from Pacific Rubiales, and its subcontractor agencies, has taken the
offensive and repressive form of mass layoffs, stigmatization, militarization of the area and a wide variety of attacks on the region’s workers.
Since 2011 countless protests have been organized in this region by workers and communities, to demand labor rights and the recognition of the right to unionize.

These protests have been met with inhumane behavior on behalf of security forces operating in the region. In the framework of the state’s response, many of our workers have been injured or arbitrarily detained. Businesses and the government have opted not to pursue social solutions, instead prosecuting leaders and activists, as illustrated by the arrest of Dario Cardenas Pachon, Vice President of USO’s Meta division, on November 2, 2013. Pachon is currently in a Villavicencio prison.

1.- On December 4, 2013 , members of the Judical Police (CTI) arrested CAMPO ELIAS ORTIZ, JOSE DILIO NARANJO, and HECTOR SANCHEZ, workers and union leaders in intermediaries contracted by transnational PACIFIC RUBIALES in the department of Meta, as ordered by an arrest warrant issued by the National Office of the Prosecutor General. It is noteworthy that Hector Sanchez Rubiales was arrested in the Rubiales region and taken to the Bogota via charter flight.

2.- The arrests were ordered by Dr. LUISA FAJARDO, Prosecutor 239 of the Individual Liberty Unit, for the serious charges of aggravated kidnapping, obstruction of roads, conspiracy to commit a crime, threats, and violation of the right to work; this is an application of the controversial Citizen Security Law, which has paved the way for a new era of prosecutions of the right to association and social protest.

3.- In the development of these hearings, it has been announced that additional members, and regional/national USO leaders are at risk of being arrested. This is further evidence that the government, and particularly the Prosecutor General's Office, are at the service of Pacific Rubiales in their transnational quest to improve "investor confidence", by means of disrespecting workers’ rights and the right of association and the right to unionize, in order to loot of our natural resources and exacerbate aberrant environment violations.

4. - Today, December 6, the security measure of preventive detention was ordered for ORTIZ, NARANJO, and SANCHEZ in the La Picota penitentiary. All they have done is defend workers’ labor and trade union rights.

5.- Hector Sanchez has received aggressive death threats throughout the year. The Prosecutor General’s Office has been made aware of these incidents but investigations have not yielded any results. We emphasize that our arrested coworkers are important witnesses in the lawsuit that the union filed earlier this year against Pacific Rubiales for the crimes of violation of the freedom of association and conspiracy.

We demand of the Colombian government that it:

1. - immediately release of our imprisoned coworkers
2. - Discontinue persecution at the hands of the state against oil workers, unions and the social-justice movement in the country
3. - Recognize Labor Rights and the rights of workers,
4. - Maintain independence between the Colombian justice system and transnational interests
5. - Repeal the Citizen Security Law and other arbitrary rules that prosecute individuals who participate in non-violent civil disobedience.

We ask of Colombia and the international community that they:

1. Urge the Colombian government to suspend the persecution and criminalization of social protest, release DARIO CARDENAS, CAMPO ELIAS ORTIZ, JOSE DILIO NARANJO and HECTOR SANCHEZ on bail, and guarantee their right to a fair trial

2. Provide moral, legal, and political solidarity and accompaniment for the USO and its detained workers
3. Demand that the Prosecutor General's Office cease institutional persecution targeting our union’s members and leadership.

On the same topic:

Continuous surge of arrests of syndicate leaders in Colombia

CRIMINALIZATION AND PROPAGANDA AGAINST LEADER OF USO – META