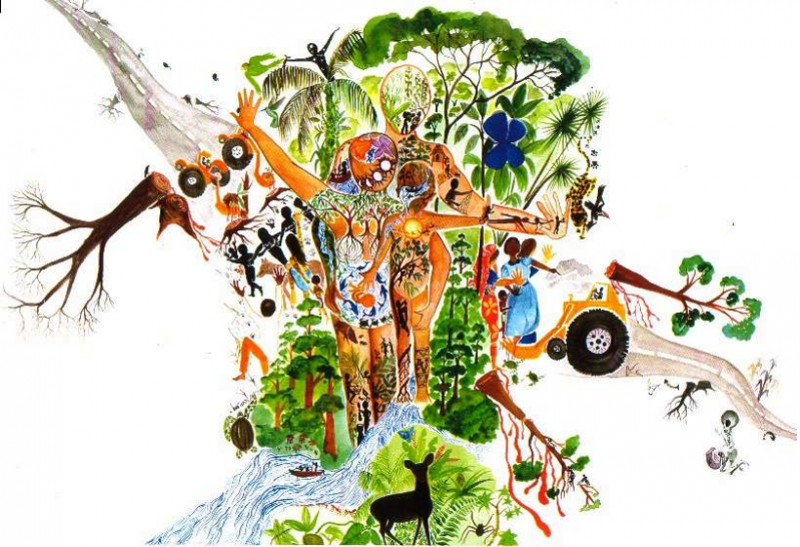 Afro-Colombian communities of the Curvarado and Jiguamiando underwent a forced displacement in 1997during a joint operation by the national army and paramilitary forces. The return of the communities to their land, now covered in African Palm tree plantations, is currently taking place under the menace of the paramilitary and the inaction of government authorities.

On June 21st, Luis Alberto, who I know better as ‘Janio’, was walking back to his home in the Humanitarian Zone of El Tesoro when he was assaulted by five illegally armed paramilitaries, who tied him up for half an hour, kicking him and threatening to kill him, accusing him and other community members of being guerrillas. Now, two weeks later I wonder if Janio is, like me, still recovering from the shock of the event.

Intimidation of the community leader EUSTAQUIO POLO, corporate infiltration inside the Incoder, preparation of the forest cutting in Jiguamiando, negative effects of palm pesticides on the health of women, repopulation in Andalucia and El Guamo.

While they protect palm extraction, the “demobilized” ‘AGUILAS NEGRAS’ THREATEN ENRIQUE PETRO AND HIS FAMILY WITH MURDER

Since April 2006, the Humanitarian Zone of Caño Claro in Curvaradó, Chocó, has been situated on the land of Enrique Petro, member of the Community Council of Curvaradó, in the midst of African Palm plantations.

While current public policies in Columbia encourage palm tree plantations, thereby destroying the Pacific and the Bajo Atrato biodiversity, scientifics and ecologist movements around the world are questioning the positive effects of palm oil and its use as a biocombustible.

from ashes to hope, from death to life.

CONVOCAN - YOU ARE INVITED BY- CONVOQUENT- CONVOCA:

Renewal of sowing and extraction of African Palm

“We will enter El Tesoro (HZ) and El Limón (BZ) where there are many people reclaiming their land” said an ex-paramilitary.

Threats of paramilitary incursions into the Humanitarian Zones and Biodiversity Zones of Curvaradó and Jiguamiandó have come true through new military tactics of population control via business channels.

Recalling that since the 8th of April 2006 the families of Curvarado, accompanied by Jusictia y Paz and PASC have been building a new Humanitarian Zone on land owned by Don Enrique Petro, member of the collective territory of Curvarado. A land which had been illegally sown with palm since the forced displacement. Recalling also that this fact is no longer in legal dispute, the Columbian government having recognized (in response to an urgent action) that this land legally and legitimately belongs to Enrique Petro.

The warnings, intimidations, and pressure of the XVII Brigade military units and police agents, the business owners and armed civilians against the inhabitants of the Humanitarian Zone of Curvarado were frequent since mid-April when farmers returned to Curvarado after 10 years of forced displacement. The same tactics were carried out against those who initiated the first Reserve Zone in the village of Cetino, where African palm has been planted illegally by palm companies since 2001.