Inviting PASC to give a workshop:

PASC gives presentations and leads workshops in various contexts in French, Spanish, and English.  In the past, we have given presentations in Spanish classes in CÉGEP, in university classes, community groups and unions and in a wide variety of social and political events. We can discuss various topics, including:

The Colombian conflict is an extreme example of historical dynamics at work
in Latin America. A historical analysis of the actors involved, as well as the role of
foreign governments such as the U.S. and Israel, enables us to understand the real political situation. We will see how the Colombian state has developed its paramilitary strategy and how it has used the forced displacement of rural populations to protect the established order and economic interests for the benefit of the Colombian oligarchy and foreign companies.

Bilateral free trade and imposition of a development model:

PASC believes it is important to examine the economic interests linked to the war in Colombia. An estimated 3.5 million people have been internally displaced in Colombia over the past 20 years. The phenomenon of displacement, while sometimes due to armed confrontations, is a strategy employed by the state against the rural population. A wide range of ranching, mining, oil, forestry, and agro-industrial projects are established in order to create strategic territories to serve domestic and international economic interests. In the conferences and workshops, PASC makes links between different agreements, such as Plan Colombia 1 and 2, Plan Puebla Panama, and bilateral agreements such as the one ratified in 2010 between Colombia and Canada.

orced displacement and attacks on food sovereignty. PASC offers a critical analysis
of the so-called solutions of supposedly sustainable development. Palm companies portray themselves as promoting socially and environmentally responsible practices. Palm monocultures, however, far from providing a credible alternative to oil, greatly contribute to ecological and social disasters. The appropriation of land for the production of biofuel is the hidden interest that lies behind many forced displacements of people in Colombia. More and more, palm plantations are replacing subsistence agriculture and destroying the food sovereignty of peasant and rural communities. In addition, they produce carbon credits to give the illusion of reducing greenhouse gas emissions.

Inspired by the challenges faced in organizing the accompaniment project, PASC offers reflection sessions for social activists engaged in international solidarity initiatives, in collaboration with Simone de Beauvoir Institute at Concordia University. These workshops explore the feminist analysis of power relations to address the concept of "privilege," specifically analyzing the privilege we have as solidarity activists that come from the global North. We propose considering the relationships of North/South solidarity as places where these privileges are expressed, but also as channels through which they are transferred. Visit and download the manual 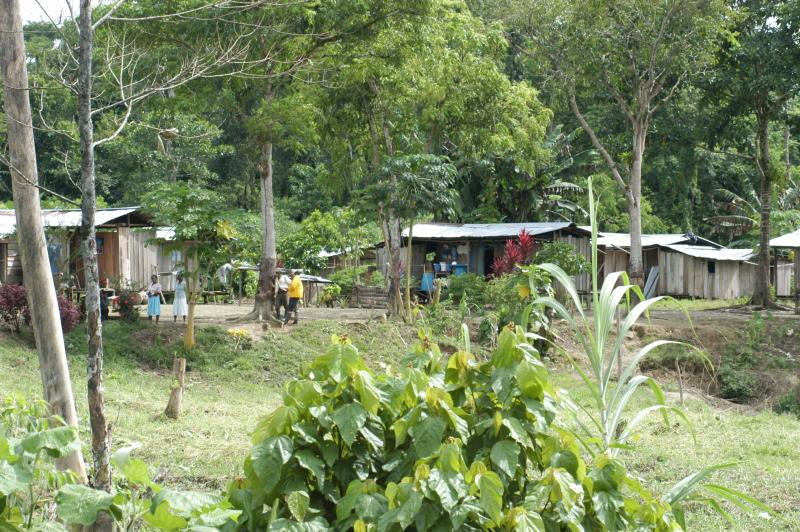 And if resistance was told to us?

A bilingual photo exhibit of civil resistance in peasant communities in Chocó, Colombia.

Organizing a screening of the PASC documentary

The Palm Empire: State Crimes and Civil Resistance in Colombia:

This documentary depicts the struggle of peasant communities in Chocó resisting an African palm agro-industrial project illegally implemented in their collective territory. The interviews and images were shot by a member of PASC on location in Colombia. Contact PASC for the DVD or to do a screening.

PASC can also facilitate an interactive exploration of the Plan Colombia poster. Covering a canvas of 3 meters by 1 meter, this fresco is a product of a process of exchange between artists of the Beehive Collective, based in the United States, and Colombian social movements. This work can be read and interpreted in all languages ​​and by all ages. The Beehive Collective uses stunning visual images and stories to illustrate the connections between  COLONIZATION, MILITARIZATION, and RESOURCE EXTRACTION. This piece of art is a product of discussions on colonialism in the Andean region that have taken place between the Beehive Collective and social movements in Ecuador, Colombia and the United States States in 2002. The work attempts to expose the lies of the war on drugs as a diversion for multinational interests to extract the wealth of biodiversity and natural resources Amazon and its peoples.