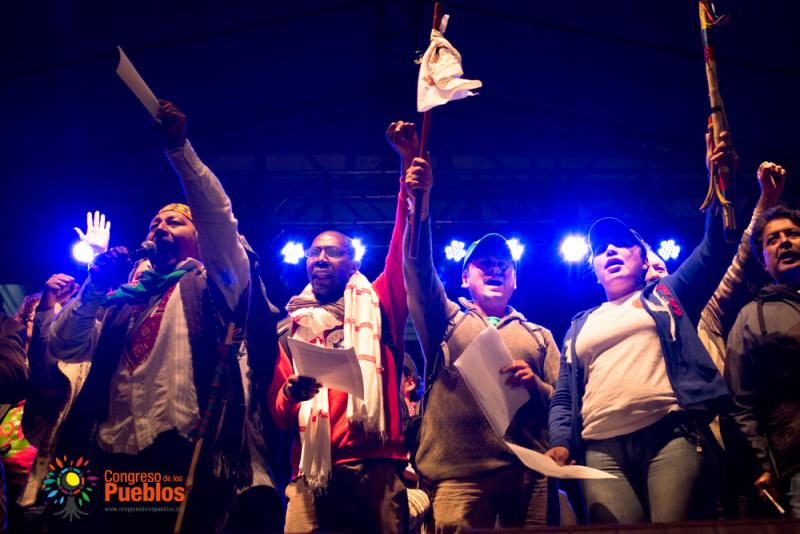 The Summit is a process which has grown as a result of the farmers and indigenous strikes in 2013, during which 19 people were killed, 600 were injured, and dozens were detained and imprisoned.  The national government sat down with us at the negotiating table to discuss our petitions and reach a series of agreements.  The summit has arisen because, after this “revolt of the ruanas, ponchos and sticks” which received broad national and international support, President Santos agreed to an Agrarian Pact with the rural agribusiness elites, thereby excluding the agrarian movement of the decisions and measures relating to national agrarian policy.

The Summit carried out an assessment of the national government’s non-compliance to its   commitments and the agreements that had been signed.  It also made progress in the process of unification of the agrarian movement in Colombia, from which it identified a path towards mobilization and mechanisms for united and coordinated negotiations.  The summit defined a path to together confront the harmful neoliberal policies applied by the governments in office and to sow dignity, cultivate hope and harvest a new country from the initiatives of the campesino, indigenous and Afro-descendent organizations.

The Summit considers that as an exercise of sovereignty, it should be the peoples and the communities who organize their territories, decide how they will be used, and determine the different modes of living in them.   Such popular land use planning should ensure harmony between the conservation of the environment, and the activities undertaken by agrarian communities for their survival.

Our territorial proposals require respect of charters for collective self-governance and the defense of territories belonging to peasant, indigenous and Afro-Colombian communities.

To us, the structural solution to the problems of access to land, property formalization and rural development continues to be a comprehensive agrarian reform, coupled with public policy and social investment.

For this purpose, it is necessary to stop the extractive model that concentrates land ownership, hands our land over to multinational companies, brings an end to peasant economies and destroys life.

The Summit proposes an economic model that ensures the survival of the peoples through strengthening of campesino, indigenous, Afro-descendent economies, and those of the popular sectors. Territorial autonomy is a determining factor in the construction of economic policy and in the guarantee of sovereignty in food production. To that end, regulations that allow multinationals to have monopolies on seeds and ancestral knowledge should be repealed.

Access to mineral and energy wealth implies the need to respect the fruits of Mother Earth.  Her exploitation should be a decision made in consultations with communities and developed as an exercise of national sovereignty.

Our search for alternatives to coca, poppy seed and marijuana, calls us to reject the prohibition that supports repressive treatment, indiscriminate fumigations, forced eradication and imprisonment of farmers as the solution. We recognise their traditional, ancestral and alternative uses. We propose programmes of autonomous, gradual and concerted substitution, with incentives to grow alternative crops that have guarantees of being commercially viable.

For the Colombian people it is of vital importance to know the truth, and to have recourse to mechanisms for justice and redress. Also, a commitment to historical memory is an important step towards non-repetition.

There must be political guarantees protecting against the criminalization and persecution of social protests, and military criminal jurisdiction must be dismantled. There should be space for the comprehensive, effective and decisive input into the planning and definition of policies for agricultural production and participative rural development, taking into account the proposals built autonomously by communities.

The people have a right to decent living conditions and the material conditions necessary for social reproduction. A special budget should be assigned to ensure funding of territorial initiatives and autonomous mechanisms for their implementation. 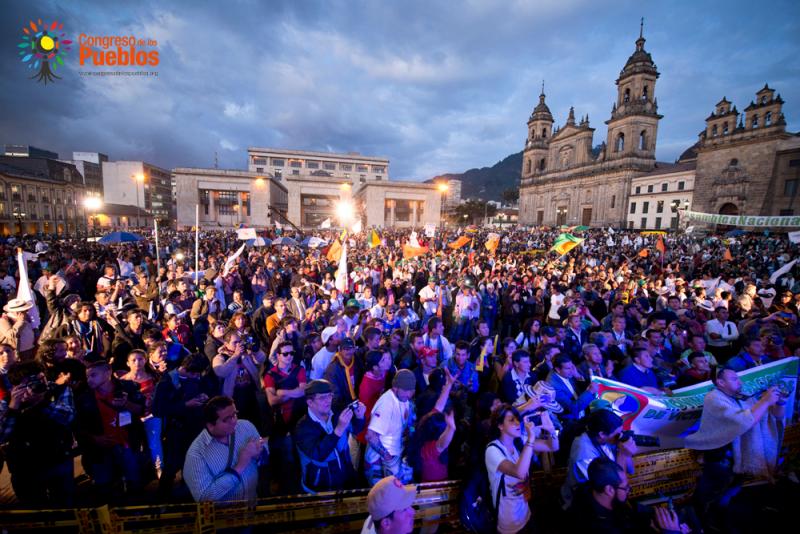 The state must recognize that many of the problems experienced in cities are a consequence of the application of economic models and dispossession in the rural sector.

The movement for rural and popular economies has significant backing in terms of support from the major urban centres; it is necessary to advance agreements between the big cities and municipalities that provide the country’s basic foodstuffs.

The social and political solution to the armed conflict is still strongly desired by a society in search for peace with social justice, which is why it is both essential and urgent that a dialogue is initiated with  ELN and the EPL insurgent forces. We support talks between the government and the FARC in Havana. We emphasize the role that we, the organizations and processes, must play as a social sector with its own voice. Regional dialogues are an important advance towards the construction of a social and political agenda for peace. The Agrarian Summit gives a great impetus to social movements working for peace as living conditions and guarantees required for participation in society.

The Agrarian Summit has managed for the first time in the history of social movements in the country to build a unified set of petitions specific to the needs of peasant, indigenous and Afro-Colombian organizations. The petitions represent the economic, social, environmental, cultural and territorial political demands of historically marginalized and excluded communities. It is a call to the national government on the urgency of a structural response to the demand for rights in the rural sector. The Summit also proposed a single negotiating table, a scenario that makes the way for a dialogue, avoids stalling and for the government to achieve dispersion and enforceable agreements in the short and medium term. The unity achieved today is also the unity of action; we now have a path of social mobilization to make the rights that have been denied to us enforceable and achievable. The Summit and its proposals are a definite commitment to the achievement of peace. A peace that to be stable and lasting must be built from below with all of us, it must be a socially inclusive peace based on truth, justice, effective political participation and full enjoyment of human rights in the Colombian countryside.

The Summit is one component of a process for the construction of a process of constituents, which comes hand in hand with the indigenous Minga, peoples’ congresses, regional peoples’ councils, the constituent processes for peace with social justice, the mechanisms of direct participation and autonomy that communities of the town and country exert on a day to day basis and demand to be recognized. The political and social agreement that builds peace should be the highlight of this constitutional process. The possibility of a national constituent assembly process is a prospect on the horizon in the imagination of the whole of Colombia. We are building our own route for the popular movement to reach this position. Meanwhile, the road to peace requires, a determined and vigorous social movement for peace, which calls on all the political and social sectors of the country. An inclusive peace is not built with "elite agreements among those who wear ties" ignoring those in ponchos, carrying hoes and machetes, who are political and social subjects with their own proposals.

Given the repeated failure of the national government to keep its word and adhere to the commitments made following the agrarian strike last year, the decision of the Peasant, Ethnic and Popular Agrarian Summit is to return the agricultural national strike, whose end will only depend on the government response. The Summit gives the government time until the first week of May. From this time the Summit will unite with indigenous reserves and the territories of afro-Colombian communities and peasant farmers, slums and social organizations in cities, trade unions, to organize strike committees convening all conflicting sectors of society to agree on a coordinated movement in pursuit of the will of the masses.

Government proposals are not solutions. The Agrarian Agreement is a sharing out of public resources and electoral ends. The national government has the historic opportunity to solve the structural crisis of the countryside from our proposals in the Unit specifications.  We believe in the social dialogue as a path to achieve social justice and stable and lasting peace so long desired in Colombia. Our proposals are on the table, it is the historical responsibility of the government to address them.