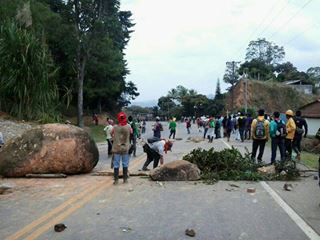 Two days after initiating La Minga Social y Popular in the entire territory of Colombia, the indigenous peoples who are spread out across the territory will maintain, as of now, in an atmosphere of prolonged peaceful protest in order to achieve a true defense of Life, Autonomy, and Sovereignty.

In the presence of 17 departments, La Minga Indígena has successfully gotten the attention of the general public, national and international media, Human Rights groups and organizations at the social level, all of which united in the just cause of the indigenous peoples.

Paradoxically, while thousands of indigenous people raise enthusiasm and fervor for mobilization in various parts of the country, there are already several Urgent Warnings that have been generated as a result of the clashes and sustained confrontations with police in various regions of Colombia.

Town Defense, the Attorney General’s Office, the Municipal Attorney of Sampués (Sucre) and other relevant supervisory bodies were elevated by the ONIC, an Urgent Warning, for the serious abuses committed against inhabitants of the village Zenú, located in the back roads of the Caribbean.

According to confirmed reports, the morning of Tuesday, October 15th (the beginning of the ‘Minga Social, Indígena, y Popular’), around 1500 participants in Zenú mobilized towards Piedras Blancas, a town of Sampués, in Sucre.

The natives revealed that the army threatened to take action to restrict the peaceful mobilization from Zenú in the framework of the Minga, the reason for which the National Indigenous Organization of Colombia raised an alarm for the lives and integrity of the 1500 indigenous peoples in the back roads of the Caribbean.

The National Defense submitted a request to activate the Early Warning System in order to guarantee the rights to life, integrity and personal liberty, autonomy, identity and free mobilization of the indigenous peoples Emberá Chamí, Emberá Katío, and Emberá Dobida, who could not mobilize because of the armed strike declared in the area.

It required that the Town Defense alter the civil authorities, police, and military about the situation that the indigenous peoples of Chocó, Antioquia, and Risaralda currently face.

The National Indigenous Organization of Colombia reported serious threats against the subsidiary organizations belonging to the Wayúu village YANAMA, PAINWASHI, WAYAWAYUU, MAYABANGLOMA and ACCIWASÚ in the framework of ‘Minga Social, Indígena y Popular.’

These organizations reported that just a few days before, while they were exercising their legitimate right to peaceful protest in the Paradero sector of the town of Albania, they were confronted by what appeared to be an isolated train accident. The train was from the business CERREJÓN, and officials of said entity allegedly exploited the incident by connecting it in an irresponsible and slanderous way to the Minga process.

The threat of forced evictions by way of the Mobile Anti-Disturbance Squadron, added with the violation of rights, are what the subsidiary organizations Wayúu on the stage of armed conflict are faced with. And from underlying factors with ties to the same thing: Cerrejón.

The Regional Indigenous Council of Huila denounced actions that led to the unjust holding of thousands of indigenous peoples who had traveled to participate in ‘Minga Social, Indígena y Popular’ on Monday, October 14th. It was confirmed that natives from 23 communities gathered in cars and ‘chivas’ (a colorful bus often used in Colombia) and were travelling on the road from the city of La Plata to the city of Neiva, when law enforcement (police, riot police, and the army) prevented them from going any further, despite the fact that the natives had the appropriate permit from the Secretary of State of the Department allowing the mobilization.

The holdings of the natives lasted six hours, and by 12:15 pm the police permitted the continuation of the journey. Officers escorted the indigenous peoples to their point of arrival, where another detachment of riot police awaited them.

Threats to the Leader of Kankuamo

The ONIC made the public aware of a series of threats directed at the leader of the village Kankuamo, Orfelina Mercedes Carrillo Muñoz, who had been singled out for her participation in ‘Minga Social, Indígena y Popular.’ It has been established that on Sunday, October 13, 2013 at 8:25 pm, the leader of Kankuamo received a threatening text message on her cell phone.

The authorities of the village Kankuamo were alerted to the situation, noting that this was the third threat to be received by the indigenous leader; warnings that were brought to the attention of the competent authorities were without effective or timely results.

The participation of the aforementioned organizations and the Indigenous People are growing in the provinces of Caldas, Cauca Valley, Chocó, and Risaralda. 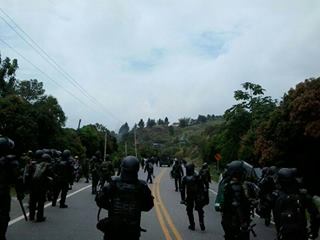 Communities belonging to the Regional Indigenous Organization of the Cauca Valley (ORIVAC) and the Association of Indigenous Councils of the Valley – Pacific Region (ACIVA-RP) assigned themselves to be in La Delfina, 72 kilometers (roughly 45 miles), by Buenaventura; exercising their legitimate right to mobilize peacefully on just one side of the road.

There, a group of the Indigenous Guard straggled behind while another group decided to rescue them, but were intercepted themselves by members of the riot police and army, who held and threatened them with firearms. The natives were attacked and retained by the army, who were taking advantage of the fact that the group was made up of no more than 50 people.

The excessive use of force on the part of the police is clear evidence of serious violations of human rights and breaches of international humanitarian law. All of this is added to the fact that the army fired indiscriminately at the marchers. The group of the guard found being held was slaughtered by gunfire.

A STATE OF EMERGENCY and grave violations were announced after twenty-five people were reported seriously injured and two natives captured. It is evident that security forces, headed by the army and riot police, have carried out actions that violate the Human Rights of the Indigenous Peoples, which have generated serious individual and collective effects. Despite the retreat of their companions and the urging call for ceasefire, attacks did not stop. The police sought to enter the shelter to continue the attacks until very late into the night, though they had already displaced the community from the path.

After everything settled down, the AWÁ communities of the El Palmar Ward in Ricaurte (Nariño) as well as a large group of indigenous Emberas from the town Apartadó decided to settle on the road